In a meeting with reporters, Foreign Minister Park Jin explained the outcomes of the meeting at the premier's official residence in Tokyo, a highlight of his three-day visit to Japan seen as an effort to mend the bilateral ties strained over wartime history and trade.

In his message to Kishida, Yoon said his encounters at a NATO summit in Madrid last month had made him assured he can work together with Kishida as a "trustworthy partner" to develop cooperative bilateral ties.

Yoon also expressed hopes to continue close cooperation with Kishida, and delivered his condolences for late former Prime Minister Shinzo Abe, who was assassinated during a campaign speech earlier this month.

The Japanese leader carefully listened to Yoon's message and recalled he had "good" talks with Yoon during the NATO summit, voicing expectations for more talks with him down the road, according to Park.

During the 20-minute meeting, the two sides also touched on the thorny issues related to Japan's wartime forced labor and sexual slavery, the minister said.

Park added he expressed his expectations for a summit between Yoon and Kishida to materialize at a mutually convenient time to help foster a new relationship between the two countries. 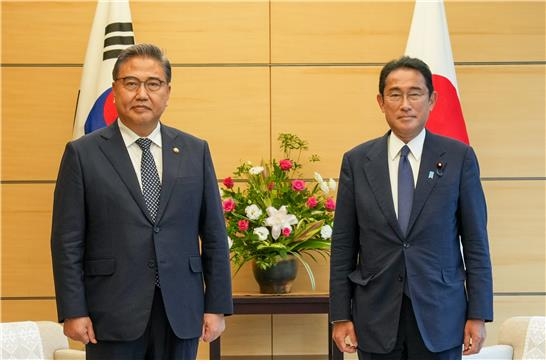 During Monday's meeting, Park and Hayashi agreed on the need for an early settlement over issues related to Koreans who were forced to labor during Japan's 1910-45 colonization of the Korean Peninsula.

In 2018, South Korea's top court ordered Mitsubishi Heavy Industries Inc. and Nippon Steel Corp. to compensate Korean forced labor victims, but the companies refused to pay them, claiming all reparation issues were settled under a 1965 accord aimed at normalizing bilateral diplomatic relations.

Park vowed Seoul's efforts to resolve the forced labor issue before the liquidation of Japanese firms' assets, as South Korea's top court is expected to deliver its final decision on related cases in the coming months.

Seoul's foreign ministry has been collecting opinions from a public-private consultative body launched earlier this month on possible compensation schemes for the Korean forced labor victims.