SEOUL, July 19 (Yonhap) -- South Korea and the United States agreed Tuesday to implement liquidity facilities, if needed, as part of efforts to cooperate in stabilizing the foreign exchange market.

Choo and Yellen agreed to closely cooperate in helping stabilize the foreign exchange market, according to Seoul's finance ministry.

The two sides "have the ability to implement various cooperative actions, such as liquidity facilities, if necessary," the ministry said in a statement after the talks.

The move appears to leave open the possibility of opening a currency swap line between South Korea and the U.S., if needed.

South Korea's US$60 billion currency swap line with the U.S. expired at the end of last year. The Bank of Korea and the Federal Reserve signed the swap facility in March 2020 to ease market routs caused by the pandemic and had extended the deal three times.

Earlier in the day, President Yoon Suk-yeol also asked for Washington's cooperation "for the stabilization of the relative values of the two nations' currencies" during his talks with Yellen in Seoul, his office said. 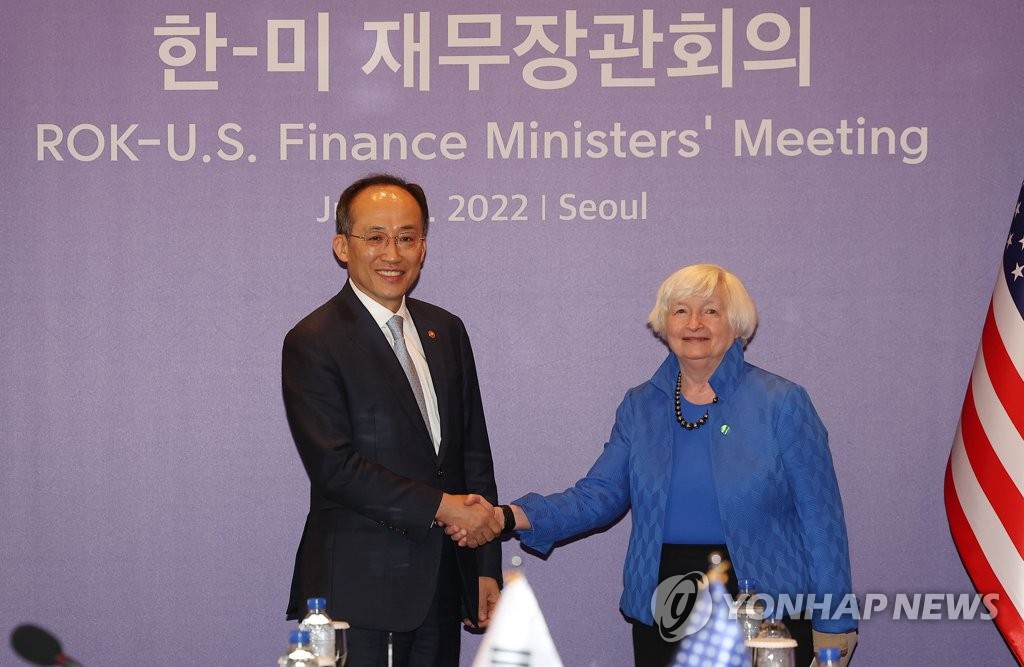 Volatility in the financial market has heightened, as demand for the dollar increased due to the Fed's aggressive monetary tightening. The won has slid more than 9 percent against the U.S. dollar so far this year.

Meanwhile, Yellen appreciated South Korea for expressing its intent to join the proposed price cap on Russian oil, according to the finance ministry.

The U.S. has asked South Korea to join the price cap in a bid to help stabilize high energy prices and prevent Russia from funding its war chest with revenue from oil exports.

The finance chiefs agreed on the need to deepen economic cooperation and policy coordination between the two nations amid heightened economic uncertainty from the protracted war between Russian and Ukraine, and global monetary tightening drives. 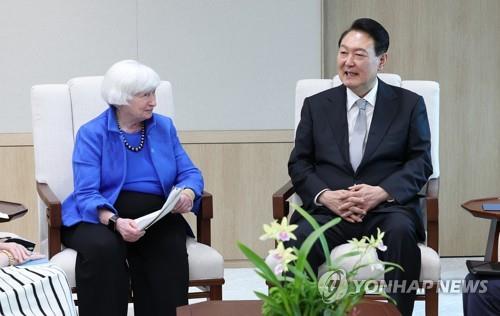 They also talked about the agreement by Yoon and U.S. President Joe Biden following their summit in May to "consult closely on foreign exchange market developments," according to the presidential office.

"President Yoon asked that the two countries' authorities hold in-depth discussions on various forms of practical cooperation measures for the stability of foreign exchange markets from the perspective of strengthening the economic security alliance, in line with the spirit of the two leaders' agreement," his office said in a press release.

"Through this, he assessed that the security alliance between South Korea and the United States will be able to evolve beyond political and military security, and industrial and technological security, to economic and financial security," it said.

Yoon and Yellen agreed low-income and vulnerable social groups will be the hardest hit in the event of a post-pandemic global economic crisis and that the government's top priority will be to overcome the crisis of people's livelihood issues.

The two sides, however, did not discuss the issue of imposing additional sanctions on North Korea and Seoul's possible participation in a U.S.-led chip alliance, known as the "Chip 4" or "Fab 4," a presidential official said.

Earlier, a source in Washington told Yonhap News Agency the U.S. has asked South Korea to inform Washington by end-August whether it plans to participate in the platform, and the presidential office here said the two nations are using "various channels" to explore ways to strengthen cooperation in the chip sector.

Yellen arrived in South Korea late Monday for a three-day visit as part of her first trip to Asia that included stops in Japan and Indonesia. It marked the first visit by a U.S. treasury secretary to South Korea since 2016.

Earlier in the day, she toured a research and development complex run by LG Group in western Seoul to call for building resilient supply chains with South Korea on semiconductors, batteries and other key materials. 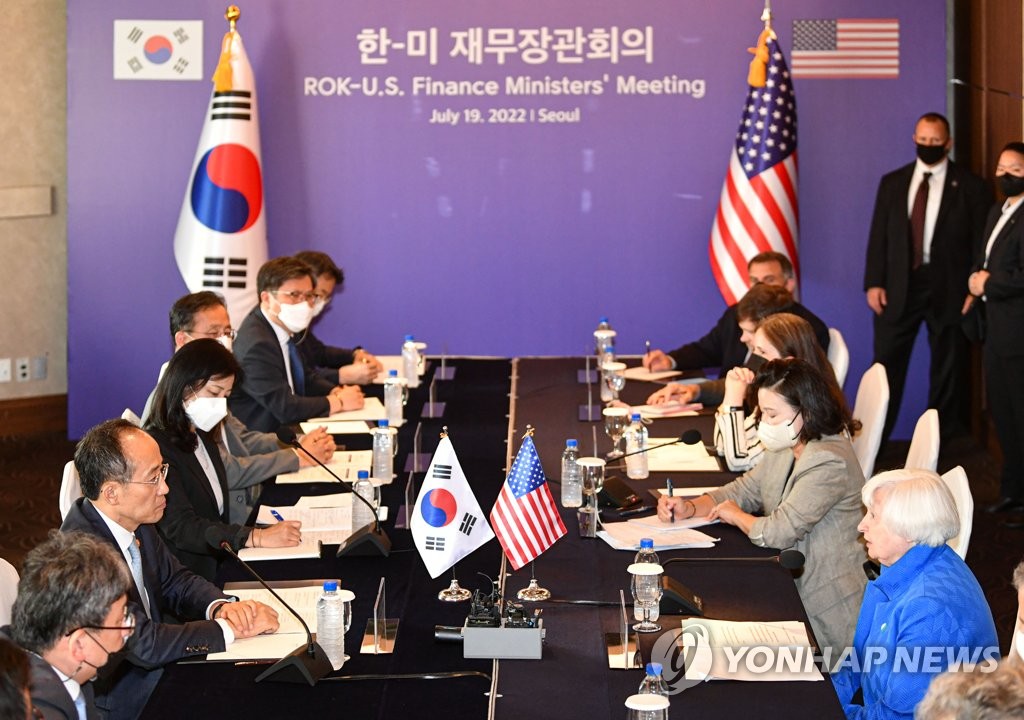