INCHEON, July 21 (Yonhap) -- An international ocean forum kicked off in the western port city of Incheon on Thursday to seek ways to further promote the maritime industry.

The two-day Incheon International Ocean Forum (IIOF) 2022 opened at Songdo Convensia in Incheon, about 30 kilometers west of Seoul, under the theme of "The World Calls, The Ocean Waves," bringing together maritime industry experts and businessmen from across the world.

The forum is hosted by the Ministry of Oceans and Fisheries and the Incheon metropolitan government, and organized by the Incheon Port Authority and South Korea's key newswire, Yonhap News Agency.

In a welcome speech, Oceans and Fisheries Minister Cho Seung-hwan said the forum is very well timed as it seeks to find solutions to difficult problems of the world from the perspective of the sea.

"The sea has been the oldest living foundation for men and is the most futuristic frontier. If we think of mankind's future, we must pay more attention to the ocean and make bold investments in the maritime and related industries," he said in a statement read by Lee Kyung-kyoo, chief of the Korea Maritime Safety Tribunal under the ministry. 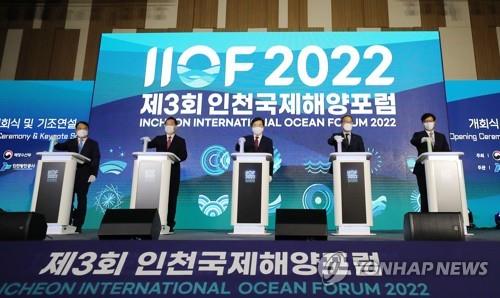 Incheon Mayor Yoo Jeong-bok said marine cities around the globe should set up a network of coexistence and cooperation to take up the challenge of a climate crisis and carbon neutrality and find solutions for problems facing mankind and the Earth.

Yonhap CEO and President Seong Ghi-hong voiced his hope that the forum will serve as a venue for seeking solutions to maritime issues facing not only South Korea but also the entire world and sharing future visions.

The opening ceremony was attended by some 300 people, with another 1,000 taking part online. Keynote speeches and all sessions will be livestreamed.

Historian, philosopher and best-selling author Yuval Noah Harari virtually delivered a keynote speech on how to make smart use of technology for mankind's prosperity.

Lee Hoe-sung, chairman of the Intergovernmental Panel on Climate Change (IPCC), gave an offline speech on "the role for a sustainable maritime economy."

The forum features five regular sessions, including one on changes in the global trade climate and the future of the maritime and port industry, and a special session on Incheon's opening as a port.

Organizers said the forum was under way both online and offline amid growing concerns about the fast spread of COVID-19 in South Korea.
(END)