The country's outbound shipments stood at US$37.25 billion in the July 1-20 period, compared with $32.52 billion a year earlier, according to the data from the Korea Customs Service.

Imports jumped 25.4 percent on-year to $45.35 billion during the cited period, resulting in a trade deficit of $8.12 billion. 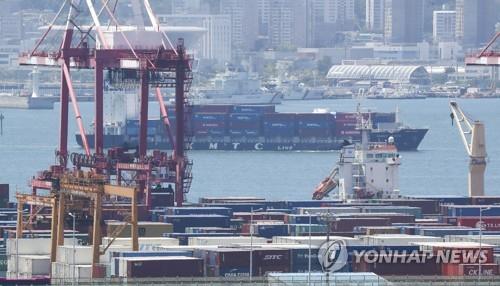 By sector, exports of semiconductors, which accounted for about 20 percent of South Korea's total exports, rose 13.2 percent on-year in the first 20 days of July.

Exports of petroleum products spiked 109.7 percent on-year on the back of high oil prices and steel shipments grew 5 percent.

But exports of mobile gadgets shed 12.2 percent and those of home appliances fell 2.3 percent, the data showed.

By country, exports to the United States rose 19.7 percent and those to the European Union added 18.1 percent. Sales in Vietnam and Singapore also logged double-digit growth during the cited period.

Imports of crude oil spiked 107.5 percent during the first 20 days of July, and those of coal jumped 148.9 percent. South Korea heavily relies on imports for most of its energy needs.

The trade deficit of $8.12 billion in the July 1-20 period more than doubled the figure from a year earlier of 3.63 billion won. The country is likely to suffer a trade deficit for the fourth consecutive month in July.

In June, exports rose 5.4 percent on-year in June, extending their gains to the 20th month, according to the trade ministry.

But high oil and commodity prices pushed up the country's imports, resulting in a trade deficit of $2.47 billion last month. In the first half, a trade deficit hit an all-time high of $10.3 billion.