About 120 unionized workers from DSME subcontractors have been occupying an oil tanker under construction at a dock of the global shipbuilder's Okpo shipyard on Geoje Island, about 470 kilometers southeast of Seoul, since June 2, demanding a 30 percent wage hike and improved working and employment conditions. DSME, the world's fourth-largest shipbuilder, said it has so far suffered an operating loss of about 660 billion won (US$504 million) from the prolonged strike.

The striking workers and their employers have reportedly narrowed their gap on wage hike proposals down to the union's 5 percent and the management's 4.5 percent but have yet to reach a compromise on other contentious issues, including the withdrawal of a damages suit against strikers and the employment succession of some subcontract workers. 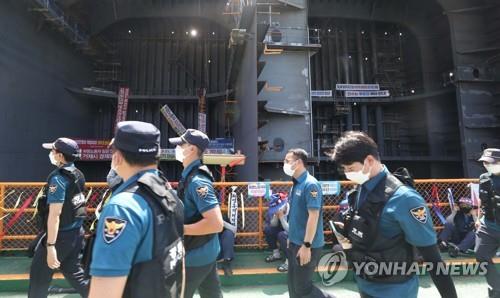 According to government sources contacted by Yonhap News Agency, police are now discussing the deployment of police personnel to end the sit-in protest and will make the final decision if the labor-management negotiations eventually fall through.

In this regard, police have been fine-tuning detailed operational plans and the timing of personnel deployment, the sources said, adding a large number of police personnel will be mobilized to ensure safety at the sit-in site.

"It is difficult to disclose the specifics of the operational plans but it's true that the police force can be deployed at any time," a police official said.

"We're making various preparations for the possible deployment, including securing on-site safety for the striking workers," the official said.

President Yoon Suk-yeol, who hinted at the use of police force for the DSME strike earlier this week, told reporters Thursday morning that the people wish to see a quick end to the strike and enabling that will be helpful to everyone.