SEOUL, July 21 (Yonhap) -- President Yoon Suk-yeol has a strong commitment to improving ties between South Korea and Japan and believes the two countries should build a relationship of trust based on common interests, his top diplomat said Thursday.

Foreign Minister Park Jin made the remark after giving a policy briefing to Yoon following a visit to Tokyo earlier this week.

"He has a strong commitment to improving South Korea-Japan relations and believes that South Korea and Japan should build a relationship of trust going forward in line with our common interests," Park told reporters. 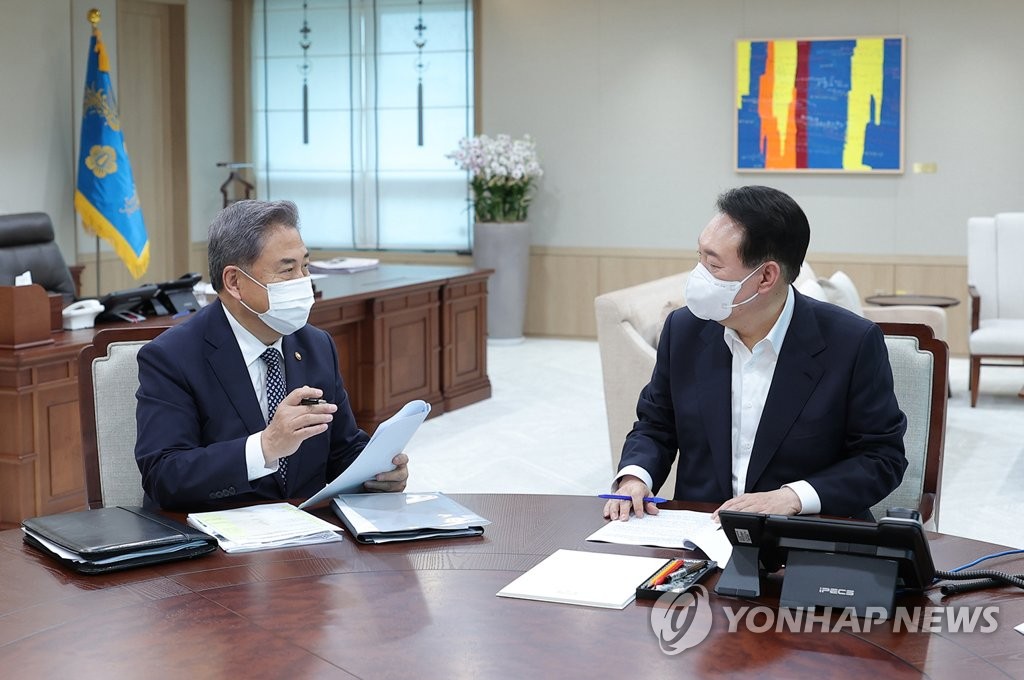 "That is why we are working to find reasonable solutions from that point of view," he said.

Relations between South Korea and Japan have been badly frayed in recent years due to disputes stemming from Tokyo's 1910-45 colonial rule of the Korean Peninsula, including the issues of compensation for victims of forced labor and wartime sexual slavery.

Park's visit to Tokyo was the first by a South Korean foreign minister in four years and seven months, demonstrating Yoon's commitment to mending the bilateral relationship.

The two sides discussed the issue of compensation for South Korean forced labor victims, which has taken on new urgency ahead of the Supreme Court's verdict on whether to liquidate the assets of two Japanese companies to enforce a 2018 ruling ordering their payment of compensation to the victims.

"We need to quickly find solutions considering Japan's concerns about liquidation and the advancing age of the victims," Park said. "I explained our position during my visit to Japan and relayed the message that it is important that Japan take sincere steps in response."

Japan has maintained that all issues of compensation were fully covered under a 1965 agreement that normalized bilateral ties.

Park said he had an extensive discussion on China during his meeting with the president, including on ways to build a "mature and healthy relationship" as two countries with a long shared history.

Yoon called for "active diplomacy" with China to ensure there are no misunderstandings regarding Seoul's participation in the U.S.-led Indo-Pacific Economic Framework or its possible participation in the "Fab 4," an envisioned semiconductor alliance led by the United States.

"These are not intended to exclude certain countries but things that need to be considered in the process of expanding South Korea's national interest," Park said.

On North Korea, the minister said the government will deter North Korean provocations based on a consistent and firm principle and take strong action in the event it goes ahead with a provocation.

He also said the government will follow a roadmap for North Korea's actual denuclearization and the normal and fundamental development of inter-Korean relations, rather than seeking political events for show.

"Together with related agencies, we will draw up and put into action an audacious plan," he said.

Presidential spokesperson Kang In-sun told reporters the president gave several instructions during the policy briefing, stressing the need for active diplomacy in cooperation with the international community based on universal rules and values.

He asked Park to maximize the national interest by pursuing diplomacy with four major nations -- the U.S., Japan, China and Russia -- with a firm South Korea-U.S. alliance at its core and by expanding the country's diplomatic horizons in Asia, the Middle East, Europe, Africa and Latin America.

He also talked about "economic diplomacy" being the most important, saying he would "go anywhere if it is of help to our economy," according to Kang.

The president further asked the minister to make utmost efforts toward the success of South Korea's bid to host the 2030 World Expo in Busan.

(LEAD) Yoon calls for relationship of trust with Japan

(LEAD) Yoon calls for relationship of trust with Japan