About 120 unionized workers from DSME subcontractors had staged a sit-in at the global shipbuilder's Okpo shipyard on Geoje Island, about 470 kilometers southeast of Seoul, since June 2, demanding a 30 percent wage hike, and improved working and employment conditions.

They had occupied an oil tanker under construction at the shipyard's main dock since June 22. 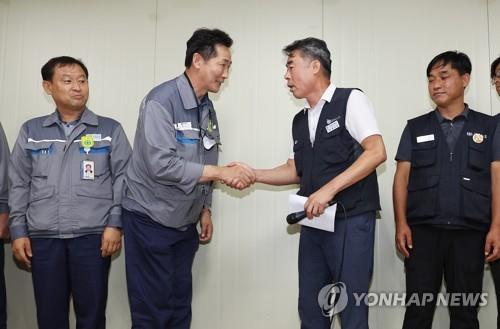 The striking workers and their employers reached a tentative agreement on a wage hike of 4.5 percent, payment of some special allowances and partial employment succession of workers from subcontractors that have closed their business, according to officials involved in the talks.

But the parties failed to produce an agreement on the withdrawal of a damages suit against strikers and the scope of criminal liability exemption for them and agreed to hold further negotiations.

The management has reportedly vowed to seek damages from striking workers, citing a heavy operating loss, but labor has denounced such a move as retaliation against workers who lack sufficient financial resources.

DSME estimates the aggregate operating loss from the prolonged strike to be more than 800 billion won (US$608 million).

The labor-management agreement came just before the shipyard begins its two-week summer holiday this weekend and the government takes steps to use police force to break up the protracted sit-in, which has dealt a heavy blow to the world's fourth-largest shipyard.