SEOUL, July 25 (Yonhap) -- The defense chiefs of South Korea and the United States will hold talks in Washington D.C. this week to discuss security on the Korean Peninsula and deterrence against evolving North Korean threats, the defense ministry here said Monday.

Defense Minister Lee Jong-sup and his counterpart, Lloyd Austin, are scheduled to meet Friday, as the allies have been cranking up security coordination amid speculation Pyongyang could ratchet up tensions by conducting a nuclear test or other provocative acts.

It would mark their second in-person meeting in their current capacities, following their first talks on the margins of the Shangri-La Dialogue, an annual security forum in Singapore, last month.

"Through this meeting, (the two sides) plan to exchange their assessments about the security situation on the peninsula and have a wide-range of discussions on various alliance issues, including efforts to enhance the enforceability of extended deterrence," the ministry said in a press release.

Amid growing North Korean nuclear and missile threats, Seoul has been striving to ensure and strengthen the enforceability of extended deterrence, America's stated commitment to using a full range of its military capabilities, including nuclear options, to defend its Asian ally.

The agenda for the upcoming talks will include combined defense posture between the South and the U.S., security cooperation among the South, the U.S., and Japan, as well as coordination on global issues, like the war in Ukraine, according to a ministry official.

Moreover, the two sides plan to discuss the issue of deploying U.S. strategic military assets to Korea as agreed upon in the May summit between Presidents Yoon Suk-yeol and Joe Biden.

Lee and Austin are also expected to make "considerable progress" in the efforts to resume the allies' vice-ministerial Extended Deterrence Strategy and Consultation Group suspended in 2018, the official said. The dialogue channel is to proceed in a "two plus two" format involving the two sides' defense and diplomatic officials.

"I cannot specify when the two plus two meeting will take place, but what I can say is that we are seeking to hold it at an early date," the official told reporters on condition of anonymity.

On trilateral cooperation among the South, the U.S. and Japan, the official said the countries have been working on developing plans to respond to the North's continued provocations.

As for the conflict in Ukraine, Austin is expected to update Lee on the status of the war and international support for the war-torn country, and touch on the need for Seoul's provision of non-lethal and other forms of aid, including the post-war reconstruction efforts.

While in the U.S., Lee plans to attend Wednesday's ceremony celebrating the completion of the Wall of Remembrance, a Korean War monument bearing the names of 36,634 U.S. troops and 7,174 members of the Korean Augmentation to the U.S. Army who died during the 1950-53 conflict.

Lee will also visit the Armed Forces Retirement Home in Washington to express his appreciation to war veterans and hold separate meetings with former U.S. Forces Korea commanders and officials from the U.S. think tank, the Center for Strategic and International Studies. 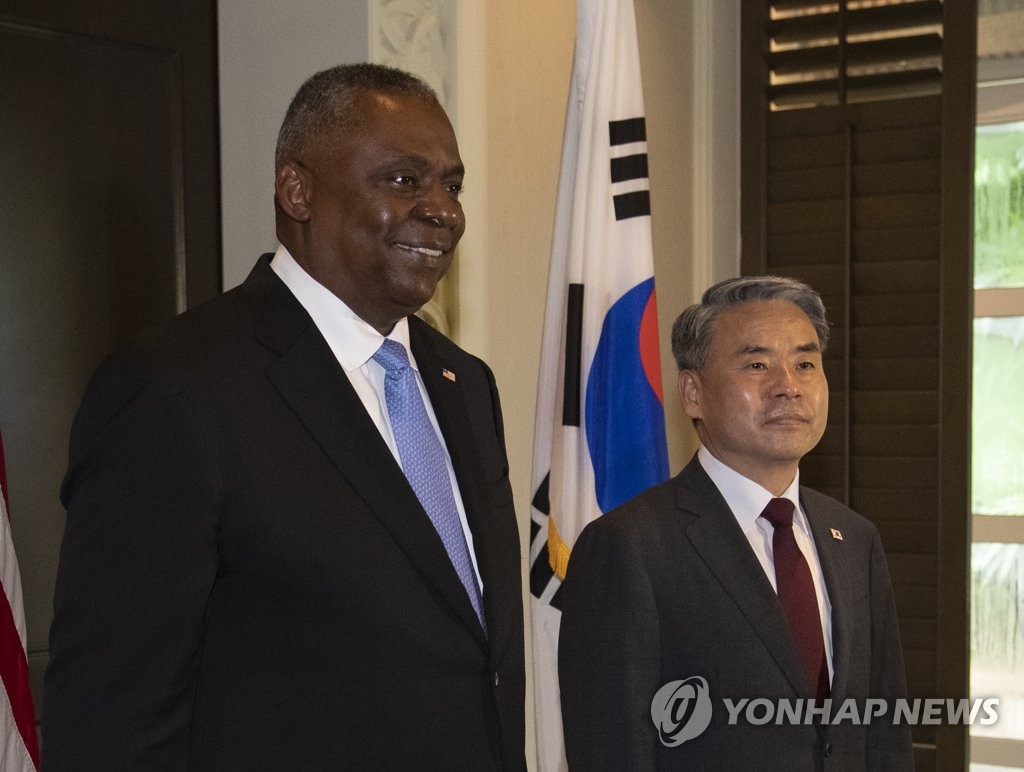