SEOUL, July 25 (Yonhap) -- The sequel to the smash-hit action comedy "The Roundup" (2022) has started production, the film's distributor said Monday.

ABO Entertainment said filming began Wednesday for the follow-up to "The Roundup" and the third installment of "The Outlaws" (2017) franchise, starring Ma Dong-seok, also known as Don Lee.

The upcoming flick, whose English title has not yet been determined, tells the story of Detective Ma Seok-do (Ma Dong-seok) cracking down on a group of Japanese yakuzas that commit crimes in South Korea.

Lee Joon-hyuk was cast as the main villain character, while Japanese actor Munetaka Aoki will play a Japanese gangster. Lee Sang-young, who directed "The Roundup," will take the helm of the sequel.

The exact date of its theatrical release has not yet been decided, added ABO Entertainment.

Released on May 18, "The Roundup" had garnered 12.68 million people as of Sunday, becoming the 13th most-watched film in Korean box office. 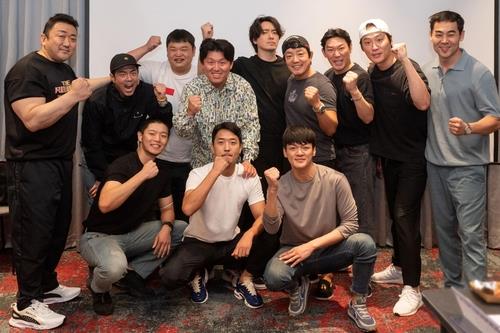 Filming begins for sequel to smash-hit 'The Roundup'

Filming begins for sequel to smash-hit 'The Roundup'