SEOUL, July 25 (Yonhap) -- Samsung Electronics Co. on Monday marked the first shipment of 3-nanometer semiconductors at a ceremony, a key milestone in the race to build the most advanced and efficient chips to date.

The next-generation 3nm chips are built on Gate-All-Around (GAA) technology, which Samsung said will eventually allow an area reduction of up to 35 percent, while providing 30 percent higher performance and 50 percent lower power consumption, compared with the existing FinFET process.

The advancement in the sophisticated chipmaking technology, which happened faster than its foundry rival TSMC of Taiwan, is expected to bring Samsung more customers looking for powerful chips that enable smaller, faster and more efficient technology products.

"Samsung opened a new chapter in the foundry business today, with the start of mass production of 3nm chips," Kyung Kye-hyun, CEO of Samsung's device solutions division, which supervises the chip business, said in the ceremony at its Hwaseong production lines, some 40 kilometers south of Seoul.

"The development of the GAA technology earlier than expected as an alternative to the FinFET process was an innovative breakthrough," Kyung said.

Samsung said it started developing the GAA technology in the early 2000s and succeeded in 2017 in applying it to the 3nm node. The tech giant said high performance computing is the first product developed based on the 3nm GAA technology and it plans to expand the application into other product categories.

Industry Minister Lee Chang-yang, who attended the ceremony, vowed to "spare no effort to fully support the semiconductor industry," based on the government's long-term policy to boost the industry by helping nurture talent, providing financial support and creating a healthy chip ecosystem. 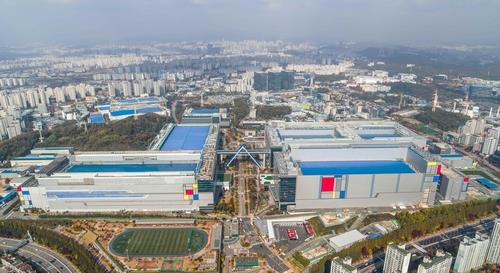 The world's largest memory chip maker has collaborated with its partners, including German tech firm Siemens and American silicon design company Synopsys, which are members of the Samsung Advanced Foundry Ecosystem (SAFETM), since the third quarter of last year to provide its foundry customers with chip design infrastructure and other services.

The South Korean tech giant showcased its 3nm chips to U.S. President Joe Biden in May when he visited Samsung's Pyeongtaek complex, the world's largest semiconductor facility located some 70 kilometers south of Seoul.

Samsung, the world's largest memory chip maker and second-largest foundry player, has said its 2nm process node was in the early stages of development, with mass production planned for 2025.

In 2019, Samsung unveiled a massive investment plan of 171 trillion won (US$151 billion) in the logic chip and foundry sectors by 2030, as the tech giant eyes the expansion of its leadership beyond the memory business.

Last month, it unveiled additional investment plans in the chip business, vowing to cement its leading position and try to enhance its contract chip manufacturing business and create a fabless ecosystem in South Korea.