Kim Yu-na and Ko Woo-rim will hold their wedding in Seoul in late October, according to All That Sports.

It did not elaborate on the exact date and the place of the wedding, saying the event will be held privately.

The two met during an ice show in 2018 and have dated for three years, according to the agency. 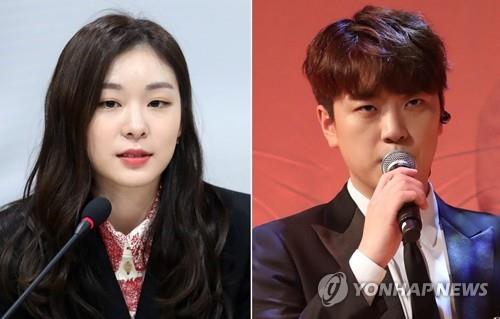 Ko, 27, is a member of the Korea crossover vocal quartet Forestella, which won the singing competition "Phantom Singer 2" that aired on JTBC in 2017.

He will continue his career as a classical and crossover singer even after the marriage, according to the agency.

Kim, 31, is South Korea's most successful figure skater in history, winning the gold medal at the 2010 Vancouver Winter Olympics and the silver at the 2014 Sochi Games.

After her retirement in 2014, she has played an active role in various fields, including serving as an honorary ambassador for South Korea's bid to host the 2018 Winter Olympic Games.