The total number of fever cases since late April came to over 4.77 million as of 6 p.m. Monday, of which 99.99 percent had recovered and at least 260 others are being treated, it added.

The North's daily fever tally has been on a downward trend after peaking at over 392,920 on May 15, three days after it announced a coronavirus outbreak. 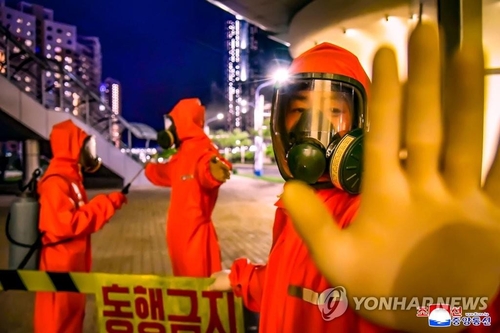 The KCNA reported the North is concentrating all efforts to ensure maximum safety in the antivirus work while paying "sharp attention" to the worldwide health crisis from monkeypox and COVID-19.

"The emergency anti-epidemic sector and the public (health) sector direct all the efforts to recovering the perfect stability of anti-epidemic situation within the shortest period and ensuring the ability to actively control and manage the inroads of a new epidemic," the KCNA said in an English-language article.

Health authorities have taken measures to "further complete the test method of monkeypox virus in a technological way," it added. Earlier this week, the World Health Organization declared the monkeypox outbreak a global health emergency.

Pyongyang disclosed its first COVID-19 case on May 12, after claiming to be coronavirus-free for over two years, and implemented nationwide lockdowns.