SEOUL, July 26 (Yonhap) -- A new Korean War monument in Washington, D.C. will be open to some family members of troops who were killed or went missing during the 1950-53 conflict before it is formally unveiled this week, according to Seoul's veterans affairs ministry Tuesday.

Around 800 bereaved family members plan to visit the Wall of Remembrance on Tuesday (local time), the eve of a planned event marking the completion of the structure bearing the names of 36,634 U.S. troops and 7,174 members of the Korean Augmentation Troops to the U.S. Army (KATUSA) who died during the war.

"The names inscribed on the Wall of Remembrance mean that we will never forget the heroes who dedicated their lives to safeguard free democracy in the Republic of Korea," Park was quoted by his office as saying.

Among the family members is Han Sin-hui, a son of Han Sang-sun, a KATUSA who died in action during the war.

"I used to look at the only picture left of my father to soothe my longing for him," Han said before visiting the wall. "I am so proud to know that my father's sacrifice for the nation hasn't gone in vain."

The wall, another symbol of the South Korea-U.S. alliance, is the first such monument on U.S. territory, in which the names of South Korean war dead are inscribed in honor of their ultimate sacrifice, according to the ministry.

The South Korean government offered 26.6 billion won (US$20.27 million) for the 27.4 billion-won project to build the wall. Other sponsors include the Korean War Veterans Memorial Foundation, the Korean Veterans Association and South Korean businesses. 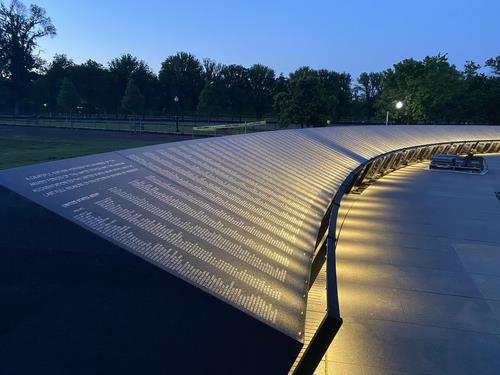