SEOUL, July 26 (Yonhap) -- The director and the writer of "Extraordinary Attorney Woo" said Tuesday they were thrilled but left dumbfounded by the recent success of the series.

"I didn't expect this drama to receive so much love. As you know, it started to be shown on a lesser-known TV channel and I wasn't sure if the subject matter was something that could draw popularity," director Yoo In-sik said during a press conference held at a hotel in western Seoul.

He then compared the drama to Pyongyang-style cold noodles with chilled beef broth that has a bland, savory flavor.

"I hoped the series would go viral among many people but didn't know if it would be received so well from early on because it has a bland taste, just like Pyongyang-style cold noodles. I'm just thankful (for this popularity)." 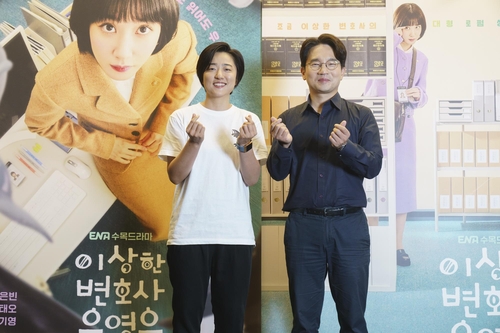 The legal drama revolving around Woo Young-woo, a genius but autistic rookie attorney at a top law firm, has captured the attention of viewers in South Korea and abroad.

Aired every Wednesday and Thursday on new cable channel ENA and Netflix, the series started out with a viewership rating of 0.9 percent on June 29. But the number surged to 13.1 percent for the eighth episode that aired on Thursday, the highest of all ongoing Wednesday-Thursday TV series in the country. The 16-part series also has topped the global streaming service's latest weekly viewership chart of non-English TV shows for the second consecutive week.

Moon Ji-won, the creator and writer of the series, also shared how she feels about the show's success.

"I have recently received phone calls from many people who hadn't been in contact," she said, smiling. "Whenever I see people having a kind of debate over the drama at coffee shops and people watching the show on a bus, I wonder, 'What the hell is going on?' I spend every day happily," she added. 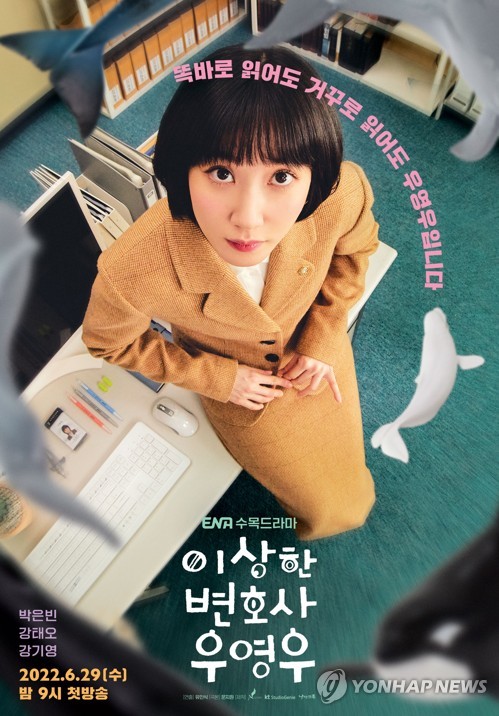 Moon also shared how the adorable character of lawyer Woo Young-woo was created.

"One day three years ago, producers of Astory visited me and asked if I think it would be possible for Ji-woo in the film 'Innocent Witness' to become a lawyer when she grows up and whether it would be fun if such a story were made into a drama. I answered 'yes' and that I want to write one," she recalled. Astory is the name of the drama's production company.

"Extraordinary Attorney Woo" then became the first drama written by Moon, after she wrote the script of "Innocent Witness," a film led by an autistic girl who is the only witness to the death of a man who either committed suicide or was murdered.

"Not all autistic people are like that, but their unique ways of thinking, eccentricity, strong sense of justice, straightforwardness, and extremely broad knowledge or memory about certain fields of their particular interest are some of the human characteristics that can be strengthened by autism," she said. "I thought these parts were attractive."

With a half of the total 16 episodes broadcast, Yoo said the latter half will be about Woo's growth as a good attorney.

"If I say the first half was about if Woo can become a lawyer, the second half would be about if she will be able to be a good one," the director said.

"People who work for Hanbada will also face concerns about their own lives, so please look forward to passionate performances by good actors," he added, referring to the name of the law firm where Woo belongs.