SEOUL, July 26 (Yonhap) -- Interior Minister Lee Sang-min on Tuesday hinted at overhauling the police personnel system that favors graduates of the national police university, amid backlash from front-line police officers over the planned establishment of a police bureau under the ministry.

"It is unfair to automatically begin a career as a lieutenant, just based on graduating from Korea National Police University," Lee told reporters before giving a policy briefing to President Yoon Suk-yeol at the presidential office.

A graduate of the four-year university is awarded the rank of a lieutenant, which is equivalent to the chief of a police precinct or the team leader at a police station. It takes at least 17 years of continuous service for an entry-level officer who did not graduate from the school to reach such rank.

The minister said such a policy is unfair as someone who starts a career at the back cannot catch up.

Korea National Police University, established in 1981, is a special university to foster elite officers. The university admits around 200 freshmen every year.

Lee's remarks came after senior superintendents gathered in protest against the envisioned establishment of a "police bureau." The protest has been led by senior police officers, most of them graduates of the university.

The plan was endorsed during a Cabinet meeting earlier in the day.

About 50 senior superintendents across the nation held a meeting Saturday to protest the plan, despite government warnings to desist, with some 140 others attending online. The minister likened the collective action to a "coup."

Police officers taking part in the action have expressed concern the bureau's oversight would compromise their political neutrality and accountability, while the interior ministry has argued it is necessary, as the police are set to take on more investigative roles from the prosecution. 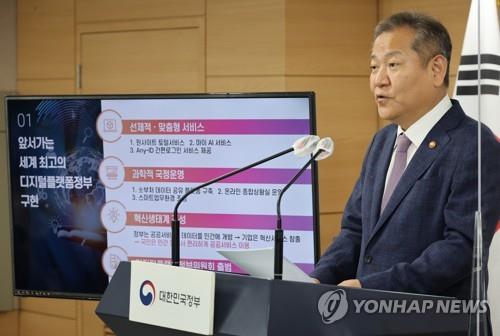