SEOUL, July 27 (Yonhap) -- A new Korean War monument is set to be unveiled in Washington, D.C. this week, the veterans affairs ministry said Wednesday, as South Korea and the United States mark the 69th anniversary of the signing of the armistice that halted the 1950-53 conflict.

Some 3,000 people, including Defense Minister Lee Jong-sup and U.S. Defense Secretary Lloyd Austin, will attend a ceremony celebrating the completion of the Wall of Remembrance at the Korean War Veterans Memorial on the National Mall at 10 a.m. on Wednesday (local time).

The wall bears the names of 36,634 U.S. troops and 7,174 members of the Korean Augmentation Troops to the U.S. Army (KATUSA) who died during the war. It was completed after 16 months of construction work. 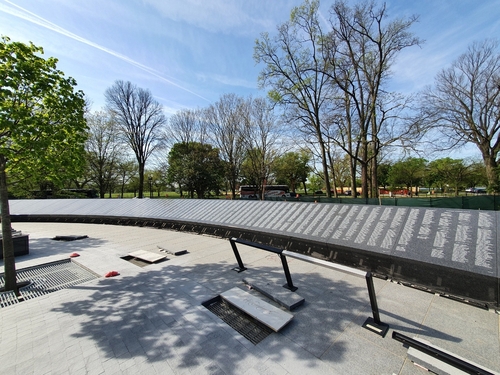 The South Korean government offered 26.6 billion won (US$20.28 million) for the 27.4 billion-won project to build the wall. Other sponsors include the Korean War Veterans Memorial Foundation, the Korean Veterans Association and South Korean businesses and citizens.

The ceremony has been timed to coincide with the anniversary of the signing of the armistice.

During the event, Veterans Affairs Minister Park Min-shik plans to read out President Yoon Suk-yeol's congratulatory message about the new monument, which Seoul officials hailed as another symbol of the South Korea-U.S. alliance.

"The wall is an emblem of the two countries' relationship woven through the war and of their friendship, and a symbol of the bilateral alliance based on which the two governments and their people can cement their greater solidarity," Park was quoted by his office as saying.

A total of 100 72-centimeter-thick granite panels were used for the wall. Of the total, 53 panels were used to inscribe the names of private or private-first-class soldiers -- a telltale sign that many young troops were killed in action during the first major armed conflict of the Cold War.

The wall is the first U.S.-based memorial monument carrying the names of the KATUSA members.

Meanwhile, South Korean Defense Minister Lee Jong-sup visited Arlington National Cemetery on Tuesday in his first official activity during his trip to the U.S. capital meant to attend the ceremony, according to his office.

Lee then met with families of some Korean War veterans, including Annelie Weber, the widow of late retired U.S. Army Col. William E. Weber who devoted his life to a campaign for the so-called Forgotten War to be remembered.

On Friday, the minister is also scheduled to hold talks with the Pentagon chief Lloyd Austin on North Korea and pending alliance issues amid reports that Pyongyang is all set for another underground nuclear test.

It would mark their second in-person meeting in less than two months following their talks held on the margins of the Shangri-La Dialogue, an annual security forum, in Singapore last month. 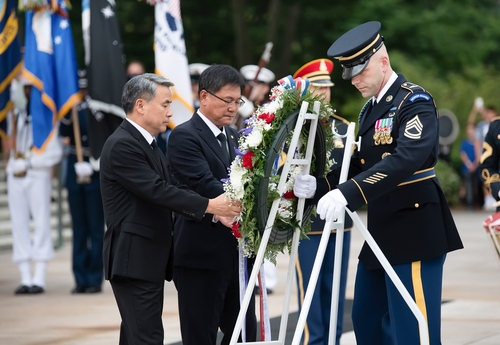 (LEAD) New Korean War monument to be unveiled in Washington D.C. this week

(LEAD) New Korean War monument to be unveiled in Washington D.C. this week