SEOUL, July 27 (Yonhap) -- South Korea held a ceremony to mark the completion of a new hydrogen production plant in the city of Pyeongtaek, the first such facility in the metropolitan area, the industry ministry said Wednesday.

The base in Pyeongtaek, some 70 kilometers south of Seoul, is the country's second hydrogen production plant following the first one in the southeastern city of Changwon, which has been in operation since the end of last year.

The Pyeongtaek plant is expected to be put into operation next month after necessary tests. It will be able to produce up to 7 tons of hydrogen per day, which can produce fuel for 430,000 hydrogen vehicles per year, according to the Ministry of Trade, Industry and Energy.

"The envisioned operation of the new plant is expected to cut distribution costs of the fuel and to boost the competitiveness of the country's hydrogen industry," the ministry said in a release.

South Korea has been pushing to set up a total of seven smaller-scale hydrogen production bases across the nation by the end of this year, as it is seeking to boost the hydrogen economy as a new growth engine. 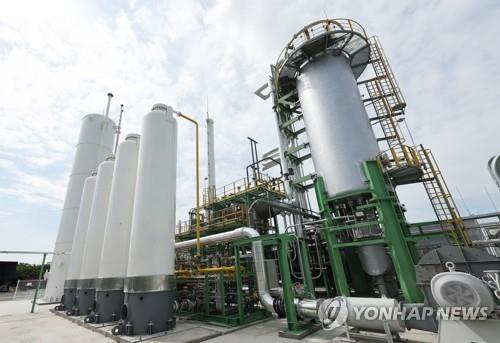