SEOUL, July 27 (Yonhap) -- South Korean stocks advanced for a third straight session on Wednesday ahead of the U.S. Federal Reserve's rate-decision meeting slated for later this week. The Korean won fell against the U.S. dollar.

Trading volume was moderate at about 324 million shares worth some 6.9 trillion won (US$5.3 billion), with gainers outnumbering losers 492 to 336. 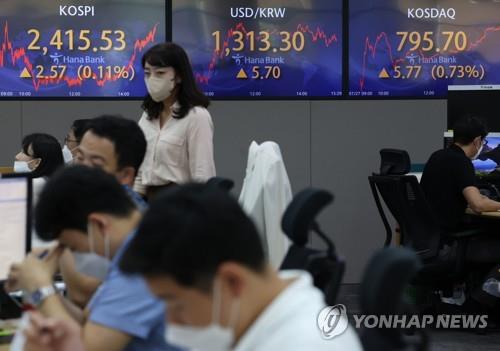 After a lackluster start, trading was weak with widespread expectations that the U.S. Fed may deliver another sharp interest hike this week.

The U.S. Fed is set to announce the results of its two-day monetary meeting results Thursday (Korean time).

"In the local financial markets, investors seem to be waiting for the (Fed's policy) guidance about the rate hikes from the FOMC meeting," said DS Investment & Securities analyst Yang Hye-jeong.

The local currency closed at 1,313.3 won against the U.S. dollar, down 5.7 won from the previous session's close.