SEOUL, July 28 (Yonhap) -- The amount of securities settlements and other funds related to the South Korean capital market expanded nearly 10 percent in the first half of the year thanks to a jump in over-the-counter bond dealings, a securities depository said Thursday.

The Korea Securities Depository (KSD) said it handled 29,914 trillion won (US$22.92 trillion) in funds related to the local capital market in the January-June period, up 9.6 percent from a year earlier.

The tally includes stock and bond settlements, and other funds related to KSD's business.

The value of securities transactions settled through the depository took up the bulk of the total with 27,062 trillion won, with that of over-the-counter repo settlements accounting for 87 percent of it.

The daily amount of KSD's fund handling averaged 241 trillion won in the six-month period, about 1.1 times that recorded a year earlier. 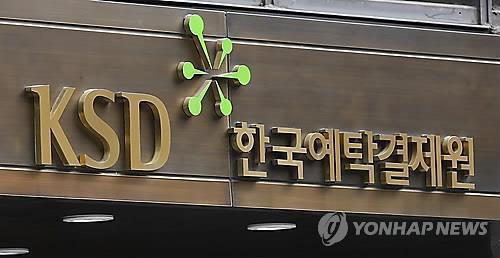