SEOUL, July 28 (Yonhap) -- South Korean stocks advanced for a fourth consecutive session Thursday as the chief of the U.S. Federal Reserve has hinted at slowing the pace of its interest rate hikes down the road. The Korean won sharply rose against the U.S. dollar.

Foreigners bought a net 410.7 billion won worth of shares, while retail investors and institutions offloaded shares worth 328.9 billion won and 20.66 billion won, respectively.

The market opened higher and had maintained the upward momentum, as the U.S. central bank on Wednesday (U.S. time) announced a 0.75 percentage-point interest rate hike to put its policy rate in a range of 2.25 to 2.5 percent.

It is the highest level since 2018 but a widely expected level.

Chairman Jerome Powell insinuated that the Fed could slow the pace of the rate hikes at some point, noting that the U.S. economy would not be in a recession given the strong labor market. 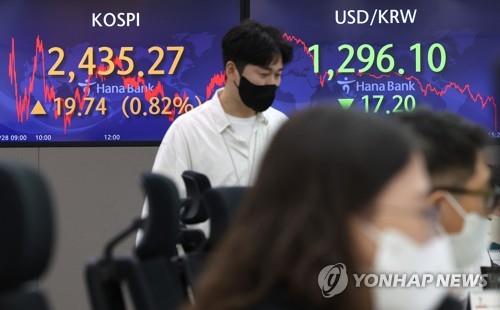 In Seoul, most big-cap shares ended higher, with tech and chemicals leading the market advance.