Widodo arrived in South Korea on Wednesday for a two-day official visit that includes summit talks with President Yoon Suk-yeol.

During the meeting, they discussed ways to boost investment and cooperation in such major industry areas as steel and batteries.

POSCO and Indonesia's state-run steelmaker Krakatau signed a memorandum of understanding on a US$3.5 billion joint investment over the five years on building a second furnace in the Southeast Asian country.

They already run PT.KRAKATAU-POSCO, their joint venture located in the city of Cilegon with an annual capacity of 3 million tons and a steel plate-processing plant.

Also on Thursday, Widodo met with Hyundai Motor Group Chairman Euisun Chung and said he expects Hyundai to play a major role in promoting electric vehicles and other environment-friendly mobility solutions in Indonesia.

Hyundai Motor Co. completed a plant in Indonesia in March to produce the IONIQ 5 all-electric model and other products.

Ahead of the meeting, business leaders of the two nations held a session to explore ways of deepening cooperation on digital systems and energy, according to Seoul's industry ministry.

"The two nations need to strengthen cooperation on the transition to digital systems, renewable energy and health care sectors, among other fields," he added. 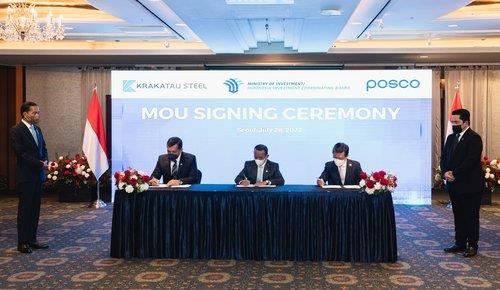