Operating income reached 429 billion won (US$330.4 million) in the April-June period, up 45.3 percent from a year earlier, the company said in a regulatory filing.

Sales came to 4.74 trillion won, also up 42.2 percent from the previous year.

The figures are the highest ever for the South Korean battery maker.

The operating profit was 5.9 percent higher than the average estimate, according to the survey by Yonhap Infomax, the financial data firm of Yonhap News Agency. The estimate of net profit was not available.

"Sales of automotive batteries increased, led by high value added products, including the Gen.5, amid strong demand," the company said in a release. "ESS battery sales also grew due to higher demand for energy storage, and its profitability also improved as the pass-through pricing was reflected."

Its energy division, which includes batteries and the energy storage system (ESS), logged 4.71 trillion won in sales, up 50.1 percent from the previous year. Operating profit jumped 45.2 percent to 244.9 billion won.

The electronics materials sector covering semiconductor and display components saw its sales rise 7.5 percent on-year to 669.2 billion, with the operating profit coming in at 184.1 billion won, up 45.4 percent from a year ago.

Samsung SDI forecast steady growth even during the second half, led by midsize to large batteries used in EVs and solid demand for ESS amid higher oil prices and a global drive for green energy.

It also expected solid sales for smaller cylindrical batteries, as the demand for mobility tools, such as e-bikes, will continue to rise, the company said. 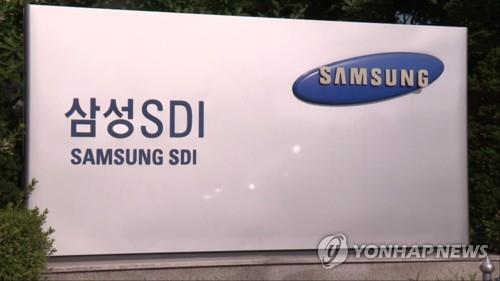