SEOUL, July 29 (Yonhap) -- South Korean high jumper Woo Sang-hyeok has risen to No. 1 in the official world rankings after winning the silver medal at the world championships last week.

According to the latest rankings by the World Athletics on Friday, Woo scored 1,388 points to top the list for men's high jump, followed by Gianmarco Tamberi of Italy with 1,377 points and Andriy Protsenko of Ukraine with 1,332.

He placed second in the previous rankings released on July 11.

He became the first South Korean track and field athlete to be the top ranker in any discipline sanctioned by the World Athletics. 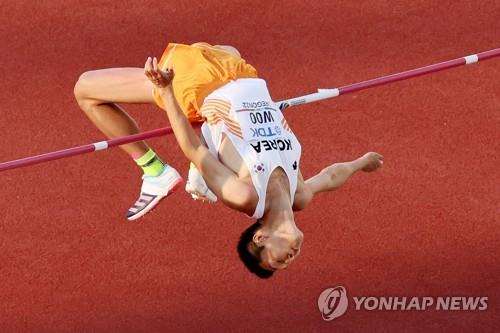 The No. 1 ranking came as Woo finished runner-up by clearing 2.35 meters at the World Athletics Championships held last week. He was slightly shy of Mutaz Essa Barshim of Qatar who won his third straight gold medal by jumping 2.37m.

Tying his own national record in Eugene, he is the first South Korean high jumper to win a world championship medal of any color.

Since the Tokyo Summer Olympics last year, moreover, Woo has been making history. He jumped 2.35m to break the decadeslong national record and finished fourth at the Games, the best Olympic showing by a South Korean track and field athlete.

He captured a historic gold medal at the world indoor championships in March, becoming the first athlete from the country to win a world title in any track and field event. 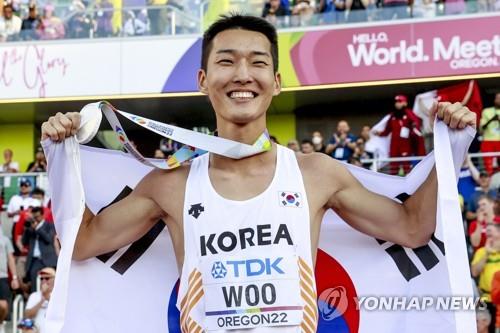