WASHINGTON, July 29 (Yonhap) -- The top defense officials of South Korea and the United States agreed Friday to expand the countries' upcoming joint military exercise and to restart their strategic dialogue on extended deterrence at an early date.

The decision to expand the military exercise comes after North Korean leader Kim Jong-un lashed out at the allied countries for holding such drills. 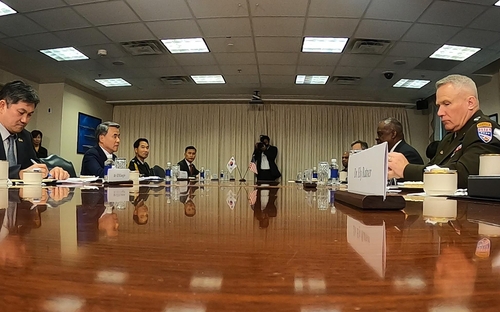 "The two ministers agreed to combine their countries' joint military exercise in the second half of 2022 with (South Korea's) government exercise (Ulchi civil contingency exercise) and continue strengthening the allies' deterrence posture, including the ballistic missile defense system and U.S. strategic assets deployed on the Korean Peninsula," Seoul's defense ministry said in a press release.

"The two ministers agreed the security condition on the Korean Peninsula was very serious due to North Korea's continued provocations, and emphasized that the South Korea-U.S. alliance will only solidify in the face of North Korea's provocations," it added.

Lee later explained the expanded military exercise will likely be called "Ulchi Freedom Shield," noting the name, freedom shield, is used for the highest-level exercise and that it represents the defensive nature of the exercise.

Pyongyang periodically accuses the joint military drills of South Korea and the U.S. of being aimed at toppling its regime.

The North Korean leader again blasted Seoul and Washington on Wednesday for holding joint military drills, calling them "thug-like behavior" and threatening to "wipe out" Seoul and its military if they make any dangerous attempt.

North Korea is widely anticipated to conduct a nuclear test in the near future, with officials in Seoul and Washington saying the country appears to have completed "all preparations" for what will be its seventh nuclear test.

Pyongyang conducted its sixth and last nuclear test in September 2017.

Austin noted the North Korean regime was currently "engaged in the most active period of missile tests in is history."

"Our alliance remains resolute and ready in the face of these dangerous and destabilizing actions," the U.S. secretary of defense said at the top of his meeting with his South Korean counterpart.

Lee underscored the importance of joint efforts by the allies to prevent and counter any North Korean nuclear test.

"We must accurately understand where North Korea stands right now, and I wish we can discuss various ways to better implement the U.S.' commitment to providing extended deterrence, prevent North Korean nuclear tests and how South Korea and the U.S. will react when the North does conduct a nuclear test," he said.

To this end, Austin and Lee agreed to resume the countries' high-level Extended Deterrence Strategy and Consultation Group (EDSCG) talks at an early date to help boost their joint deterrence, according to the defense ministry. A ministry official later said the countries have agreed to hold a EDSCG meeting before the end of September.

Defense Minister Lee said the countries will also hold a joint "operational exercise" for U.S. extended deterrence in the near future.

"It was an opportunity to again confirm the U.S.' commitment to extended deterrence and its ability to execute such a commitment," Lee said while meting with reporters.

"For instance, we reaffirmed the U.S.' commitment to counter North Korea's nuclear capability with all available means, including strategic assets such as nuclear-powered carriers and fighter bombers," added the minister.

Lee and Austin also reaffirmed the countries' agreement to develop their alliance into a "global comprehensive strategic alliance," according to the defense ministry.

"The two ministers made it clear that South Korea and the U.S. will jointly take stern measures against a North Korean nuclear test based on their strong joint defense posture should North Korea conduct its seventh nuclear test despite opposition from the international community," it said.