One of the bills calls for enabling a government committee to designate special zones on strategic industries and provide support for their establishment, and expanding education programs to foster students to work in such key industries, including specialized high schools.

The other bill calls for extending the period of tax credit for investments in high-tech industries to 2030, with the deduction rate raised to 20 percent for conglomerates, 25 percent for midsized enterprises and 30 percent for small businesses from the current 6 to 16 percent range.

The bills also stipulate extending the tax exemption period for foreign technical experts in the areas by five years to 10 as part of efforts to induce an influx of technicians.

"I ask lawmakers of rival parties to actively participate in the legislation of these bills to help the semiconductor industry to have a bright future with persistent support," Rep. Yang Hyang-ja, a Samsung Electronics executive-turned-lawmaker leading the PPP panel, said.

Yang also called for the establishment of a parliamentary standing committee on the semiconductor industry to continue discussing support measures.

On Thursday, a special law on creating an innovative environment for the growth of advanced industries and increasing their competitiveness will also take effect. 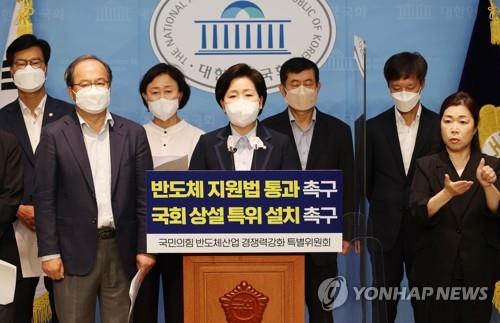