Ahn made the remarks during a meeting with experts in Seoul as South Korea is seeking to strengthen economic relations with China on the occasion of the 30th anniversary of establishing diplomatic ties, according to the Ministry of Trade, Industry and Energy.

"It is crucial to create environments where South Korean and Chinese companies continue trade and investment in a stable manner amid growing external uncertainties," Ahn said.

"For the goal, the two nations' trade authorities need to set up close communication channels involving civilian and state entities. It is also important to make the most of the bilateral free trade agreement for enhanced cooperation," he added.

China is South Korea's largest trade partner. In 2021, bilateral trade hit an all-time high of US$301.5 billion, up 24.8 percent from a year earlier. The comparable figure for 1992 was $6.3 billion, government data showed. 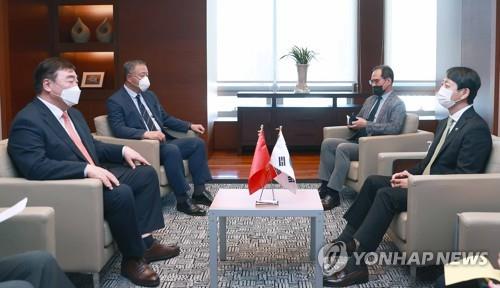