The minister said he will make clear the Yoon Suk-yeol administration's position on the North Korean nuclear issue and explain its policy on ASEAN as a "signal" for its full-fledged diplomacy on the key regional bloc.

He is scheduled to take part in the South Korea-ASEAN foreign ministers' session Thursday in Phnom Penh, followed by an expanded gathering, also involving his Chinese and Japanese counterparts, which is called the ASEAN Plus Three meeting.

"Regarding North Korea, (I) will again emphasize our clear position on denuclearization, and urge North Korea to halt provocations and resolve this issue through dialogue and diplomacy," he told Yonhap News Agency at Incheon International Airport just before departure. 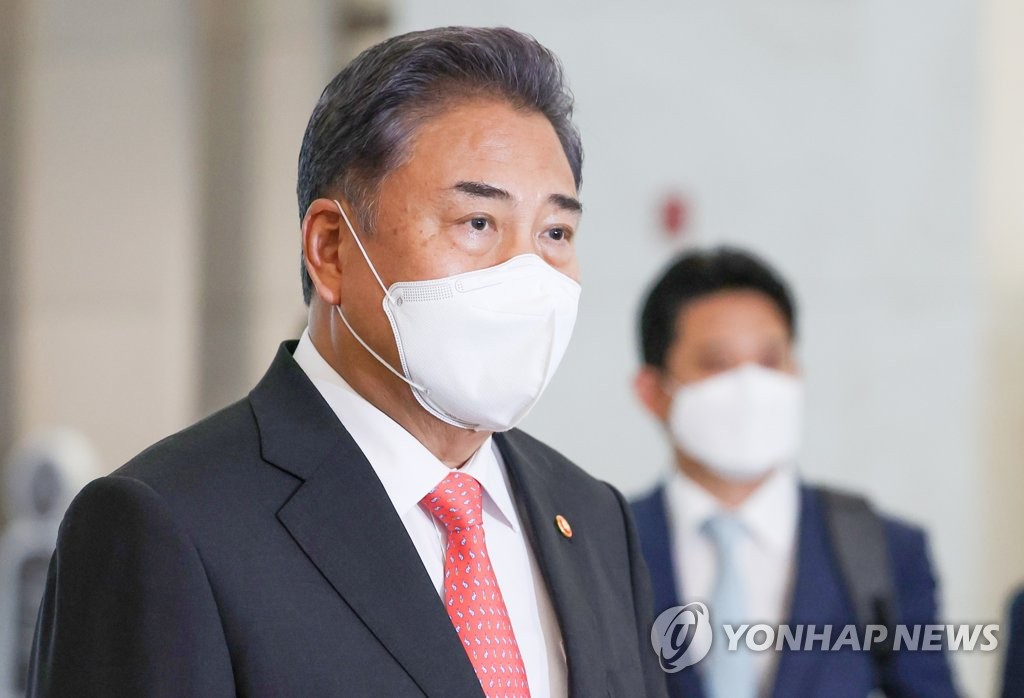 He plans to have a string of bilateral talks with foreign ministers from more than 10 countries, including ASEAN member states, on the sidelines of the events.

No schedule for such a one-on-one meeting has been fixed yet, Park said and expressed hope for a chance to "communicate" with the Japanese side in a "natural" manner in the Cambodian capital.

On Friday, Park is slated to participate in the ASEAN Regional Forum (ARF), in which North Korea is a member as well. Pyongyang is reportedly sending An Kwang-il, ambassador to Indonesia who doubles as point man on ASEAN, instead of its top diplomat, Choe Son-hui, for the first in-person ARF session in three years, amid the reclusive nation's coronavirus related-lockdowns. The ARF meetings were held virtually in 2020 and 2021 due to the pandemic.

Asked about the possibility of holding a separate meeting with the top North Korean delegate, Park said there is no plan for that.

Among other attendees are U.S. Secretary of State Antony Blinken and Chinese Foreign Minister Wang Yi.

Park will also join the East Asia Summit (EAS) Foreign Ministers' Meeting, which is expected to set the stage for discussions on such issues as Russia's invasion of Ukraine, China's assertiveness in the South China Sea and Myanmar.

It comes as Beijing-Washington stand-offs have intensified over U.S. House Speaker Nancy Pelosi's visit to Taiwan.

Park stressed the importance of peace and stability in the Taiwan Strait for South Korea, a regional country. "So, (we) are keeping a close eye on the situation," he said.

He is to return home Saturday morning.