JEJU, South Korea, Aug. 3 (Yonhap) -- A total of 112 Thais were denied entry for an alleged attempt at illegal job-hunting after their arrival on the southern island of Jeju earlier this week, officials said Wednesday.

Of 184 Thai nationals who arrived at Jeju International Airport from Bangkok on Tuesday morning, 125 underwent reexamination for their entry, according to the Jeju Immigration Service. Of them, 110 were flown back home late Tuesday night.

Two others who had been staying at the airport were also sent back for the same reason, raising the toll to 112.

Thai nationals can enter South Korea without a visa under a mutual visa waiver pact between the two countries.

Of them, 92 people had been previously denied entry after applying for electronic travel authorization (K-ETA), authorities said. They appear to have chosen Jeju, which they can enter without the K-ETA process, they said.

It is rare for such a large number of tourists from one flight to be denied entrance.

Travelers are put under reexamination when they have criminal records or are feared not to go back to their homeland.

Immigration authorities are also conducting a reexamination for 120 out of 183 Thai tourists who landed at Jeju airport Wednesday. 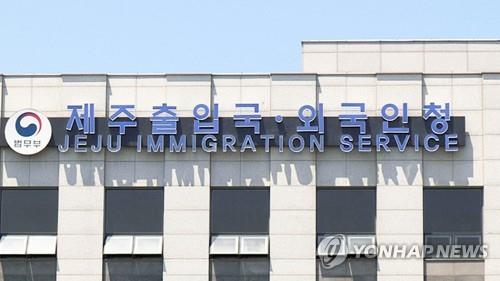