During a meeting with Lithuania's Vice Economy Minister Jovita Neliupsiene in Seoul, Deputy Trade Minister Jeong Dae-jin called on the European nation to deepen cooperation in the key sectors, according to the Ministry of Trade, Industry and Energy.

Lithuania is home to some of the leading laser system companies in the world, including Light Conversion and Ekspla, as well as bio and various other high value-added fields, it noted.

Neliupsiene also voiced hope for stronger bilateral ties, particularly as her country sent an ambassador to South Korea for the first time in June 2022, according to the ministry.

The Lithuanian vice minister is in Seoul to attend the Bioplus Interphex Korea 2022 under way in Seoul, a major bio-pharmaceutical exhibition on research and development, manufacturing, logistics and technologies in the field. 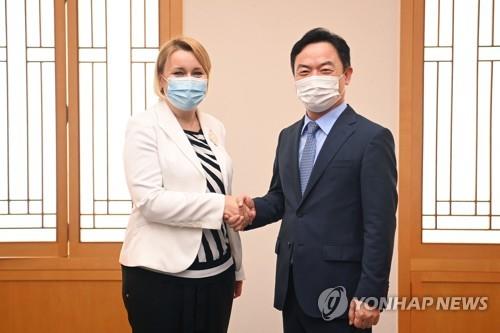