SEOUL, Aug. 4 (Yonhap) -- President Yoon Suk-yeol told visiting U.S. House Speaker Nancy Pelosi that her visit to South Korea is a sign of deterrence against North Korea and he will closely work with U.S. Congress to deepen the bilateral alliance.

Her two-day trip also includes a visit to the inter-Korean truce village of Panmunjom later Thursday.

Referring to Pelosi's visit to the Demilitarized Zone dividing the two Koreas, Yoon told Pelosi, "This visit by Pelosi's delegation will become a sign of deterrence between South Korea and the United States against North Korea."

Pelosi told Yoon the allies need to jointly build a free and open Indo-Pacific order, according to Kim.

Officials said earlier an in-person meeting between Yoon and Pelosi is not planned, as Yoon is on summer vacation.

Pelosi arrived in Seoul on Wednesday night amid heightened tensions between the United States and China in the wake of her visit to Taiwan. China denounced Pelosi's trip and announced live-fire military drills around Taiwan in protest. 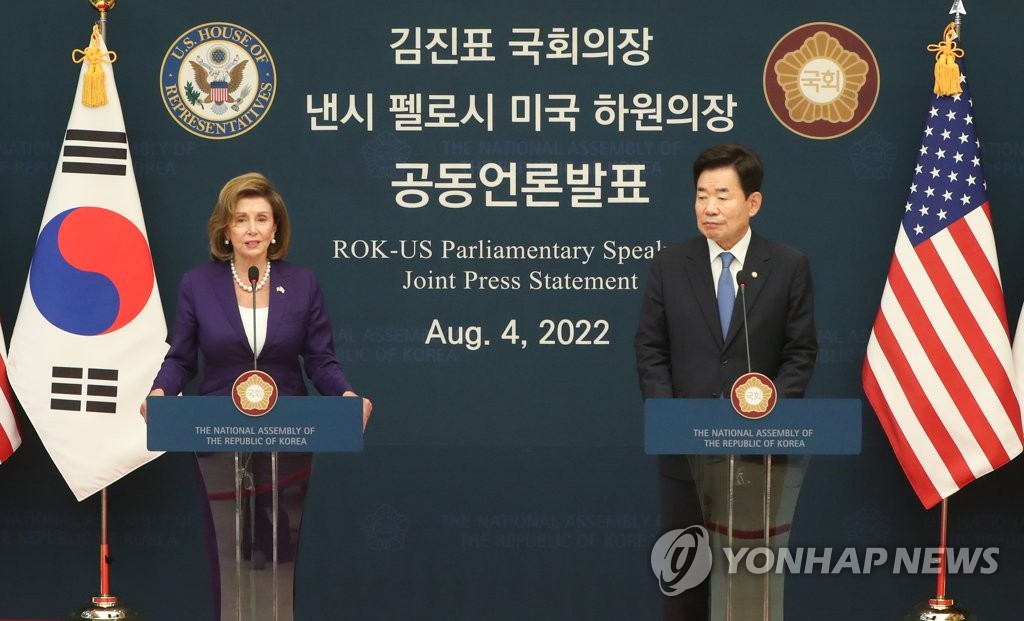 Some lawmakers from both ruling and opposition parties had urged Yoon to meet with Pelosi in person, and some media reports speculated Yoon may shun meeting with Pelosi due to heightened Sino-U.S. tension over Taiwan.

Choi Young-bum, senior presidential secretary for public relations, declined to comment specifically on there being no in-person meeting between Yoon and Pelosi.

Asked about why Yoon did not meet with Pelosi, Choi told reporters, "Everything is decided in consideration of national interest."