The fire broke out at 10:17 a.m. at the dialysis hospital on the top floor of the four-story building, where 46 people, including 33 patients, were staying, according to the officials.

The fire killed five people, including three patients and one nurse, all found on the fourth floor, while 37 others sustained injuries, such as smoke inhalation.

Mobilizing 21 fire trucks and 51 personnel, firefighters completely extinguished the fire at 11:29 a.m. before sending in rescuers to the fourth floor to see if anyone needed help.

Fire authorities assume the fire started at a screen golf facility on the building's third floor although a probe is needed to determine exactly where and why the fire started.

The building also houses an oriental medical clinic and offices on the second and third floors and restaurants on the first floor, according to the officials. 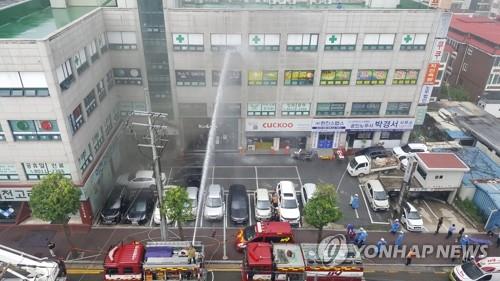 (2nd LD) 5 killed, 37 others injured in fire at hospital in Icheon

(2nd LD) 5 killed, 37 others injured in fire at hospital in Icheon