SEOUL, Aug. 5 (Yonhap) -- A civic group filed a constitutional petition against the state minimum wage system Friday, arguing that enforcing a compulsory minimum wage on employers violates their freedom of contract and business.

The Minimum Wage Commission, which is composed of nine members each from labor, business and the general public appointed by the president at the recommendation of the labor minister, sets the minimum wage every year through negotiations.

The rate thus agreed upon under the Minimum Wage Act goes into force upon the labor minister's approval, with employers paying less than the approved rate subject to a prison term of up to three years or a fine of 20 million won.

Holding a press conference in front of the court, the civic group said it is unconstitutional to punish employers for violating the minimum wage that is determined by commission members who are not chosen by the public.

The group also argued applying the rate equally across different industries and shops is problematic and the system infringes upon employers' freedom of contract and business. 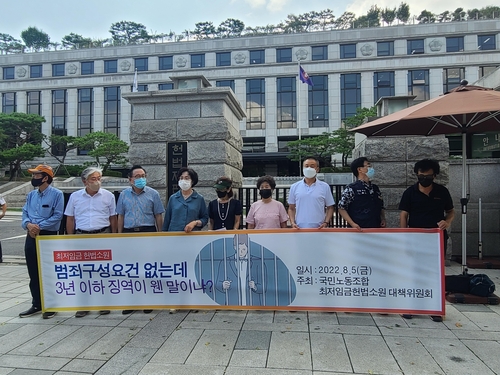