SEOUL, Aug. 7 (Yonhap) -- President Yoon Suk-yeol is expected to issue a message that he will uphold the will of the people in a more humble manner, an official said Sunday, when he returns to work from a weeklong vacation amid unusually low approval ratings.

Yoon has seen his ratings in the 20s in recent weeks, only three months after taking office, amid high inflation and other economic woes as well as negative perceptions of his personnel appointments and unpopular policy proposals, such as lowering the elementary school starting age.

"In any form, the president is expected to express his intention to uphold the will of the people in a more humble manner and reflect it in state affairs," a presidential official told reporters on customary condition of anonymity.

Yoon is scheduled to return to work on Monday after a five-day vacation.

The presidential official said, however, that Yoon is unlikely to reshuffle aides as a way to drum up support, and instead is expected to ask secretaries to work harder to better serve the people.

"It is hard to predict, but as it has been less than three months since his inauguration, he is expected to call for aides, who have shown shortcomings, to redouble efforts," the official said when asked about the possibility of Yoon carrying out a reshuffle of the presidential office. 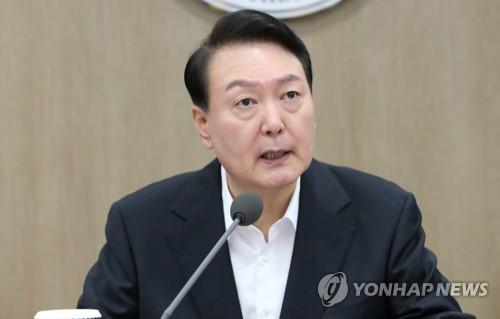