Park has been under pressure to step down after many teachers and parents protested strongly against lowering the school entry age by one year to 5. She has been criticized for announcing the proposal without sufficient preparations, such as collecting public opinion.

Her ministry had also unveiled a plan to abolish foreign language high schools, only to retract it days later.

Should President Yoon Suk-yeol accept the resignation, Park will be the first Cabinet minister to step down since Yoon took office in May.

"I am going to resign as education minister and deputy prime minister," Park said in a press conference.

"All the responsibilities for the controversy are on me and my faults," she said.

A ruling party official said earlier in the day Park was expected to step down Monday.

Her resignation would effectively amount to her dismissal as President Yoon Suk-yeol reportedly made up his mind to fire her during his vacation last week. 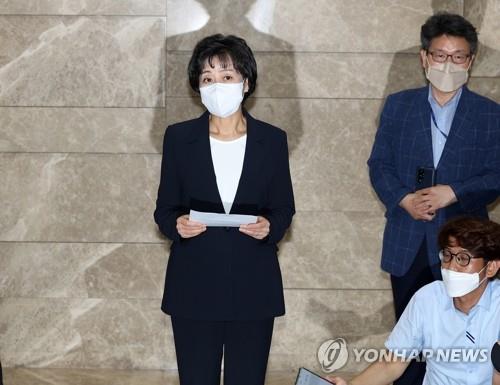