In the poll of 2,528 people conducted by pollster Realmeter from Monday to Friday, 29.3 percent responded that Yoon was doing well on state affairs, down 3.8 percentage points from the previous week.

Those who gave a negative assessment rose 3.3 percentage points in the same period to 64.5 percent, more than twofold of those who gave positive evaluations.

The pollster attributed the weekly decline to a number of factors, including Education Minister Park Soon-ae's proposal to lower the school entry age for children, a leadership row at the ruling party and persistent economic woes.

"On top of the ruling party and opposition parties entering an emergency system phase, an imminent economic crisis and a protracted COVID-19 breakout will heap pressure on Yongsan and the ruling party rather than the main opposition," Bae added, referring to the neighborhood where the presidential office is located.

The poll has a margin of error of plus or minus 1.9 percentage points at a 95 percent confidence level. 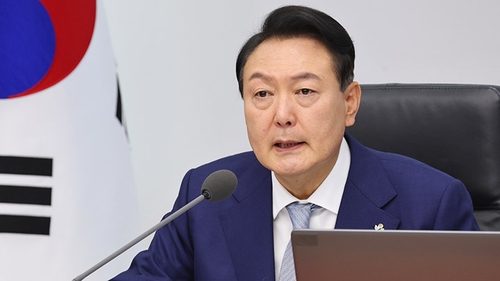