It marked his first visit to Camp Humphreys in Pyeongtaek, 70 kilometers south of the capital, since taking office in May. The trip came as the allies are gearing up to conduct the Ulchi Freedom Shield (UFS) exercise slated for Aug. 22-Sept. 1. 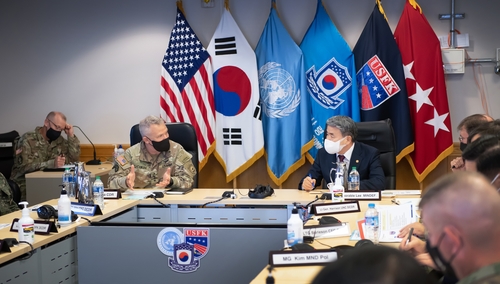 On the UFS, Lee called on troops to "focus all your capabilities" on further developing a comprehensive combined training system through pan-government crisis management drills and other contingency procedures, according to the ministry.

He also gave words of encouragement to South Korean and U.S. troops there, touting them as "working on the front line of combined defense under the 'fight tonight' spirit."

Lee and U.S. Forces Korea (USFK) Commander Gen. Paul LaCamera agreed to work closely together to ensure the UFS will proceed "fruitfully" while concurring on the importance of field training, the ministry said.

In a separate press release, the USFK said that Lee and LaCamera agreed to strengthen interoperability of allied practices and capabilities by conducting peninsula theater-level combined training aimed at increasing readiness.

"The two sides shared the view that building, maintaining and enhancing relationships at all echelons was important to future efforts," it said in a press release.