(ATTN: UPDATES throughout with more info)
By Yi Wonju

SEOUL, Aug. 9 (Yonhap) -- North Korea's new suspected COVID-19 cases have remained at zero for over a week, according to its state media Tuesday.

It did not provide any other information in its report. 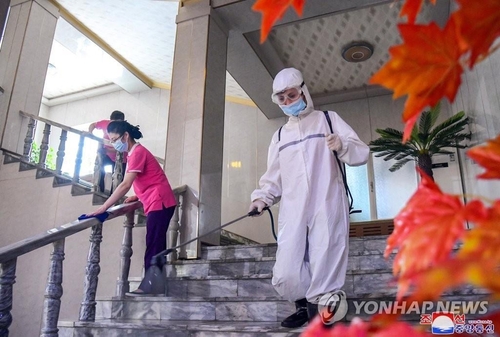 The KCNA said health authorities are taking precautions against the spread of infections during the rainy season and stepping up efforts to improve the stability of the antivirus situation.

"Based on a more concrete and stable anti-epidemic system, the state emergency anti-epidemic headquarters carries out operation and command by focusing on building up the all-people anti-epidemic defence line in the current condition where it is confirmed that there are no cases of the malignant virus in the country," it said in an English-language report.

The authorities are also taking measures to improve "rainwater disposing capacity" and strengthen the maintenance of drainage systems to prevent the outbreak of diseases.

Earlier, the KCNA reported the North will hold a national meeting "early in August" to review antivirus measures, drawing attention to whether it will announce new regulations or declare an end to its coronavirus crisis.

The North's daily fever tally hit zero on July 29 after peaking at over 392,920 on May 15, three days after it announced a coronavirus outbreak.