The market consensus of KEPCO's consolidated operating loss stands at 5.37 trillion won (US$4.11 billion) for the April-June period, flirting with the 5.86 trillion-won deficit for the whole of 2021, according to FnGuide.

In the first quarter of this year, the state power company chalked off a record quarterly operating loss of 7.79 trillion won, stung by sky-high liquefied natural gas and other energy prices.

KEPCO is slated to announce its second-quarter earnings Friday.

KEPCO's heavy loss comes as the company has not been able to jack up electricity rates high enough to reflect surging costs due to government measures to curb runaway inflation.

KEPCO hiked the adjusted unit fuel cost -- a key part of the country's electricity rates -- by a mere 5 won ($0.004) per kilowatt hour for the July-September period. 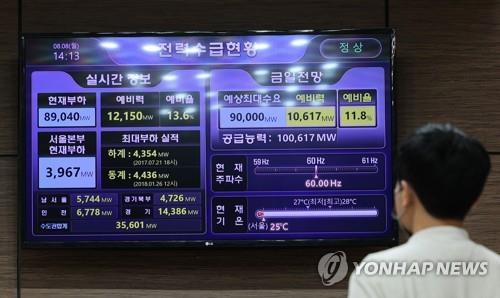 Asia's fourth-largest economy is struggling to rein in soaring consumer prices, which jumped 6.3 percent in July from a year earlier, the fastest pace in almost 24 years.

Analysts painted a gloomy picture of KEPCO's performance for the third quarter amid soaring international gas prices due to Russia's supply cut.

Despite spiking costs, KEPCO will find it difficult to raise electricity prices further down the road, given the country's high consumer inflation, they added.

Indeed, Lee Chang-yang, minister of trade, industry and energy, told reporters Monday that any power rate hikes should be minimized in light of the impact of galloping inflation on people's lives.

KEPCO's snowballing losses have sparked concerns over its financial soundness.

In late June, the finance ministry said it will keep close tabs on the financial health of KEPCO and 13 other state-run corporations.

In a meeting with reporters on June 22, Prime Minister Han Duck-soo called for drastic reform of the loss-making KEPCO, saying its self-rescue plans, including asset sales, are insufficient.
(END)