SEOUL, Aug. 9 (Yonhap) -- South Korea, the United States and 19 other countries are conducting a U.S.-hosted exercise in Hawaii with an aim to prevent the proliferation of weapons of mass destruction (WMD), the U.S. State Department has said.

The five-day Fortune Guard 22 kicked off in Honolulu on Monday. It is part of the exercises for the Proliferation Security Initiative (PSI) launched in 2003 to stop or impede transfers of WMDs and related items flowing to and from states and non-state actors of proliferation concern.

The exercise involves WMD counter-proliferation activities, including operational interdiction and seizure, as well as information exchanges on chemical, biological, radiological and nuclear responses, and live exercises on WMD interdiction capabilities, according to the department.

Col. Moon Hong-sik, the deputy spokesperson of Seoul's defense ministry, said that South Korea has sent to the exercise personnel from various organizations, including the ministries of defense and foreign affairs, and the Coast Guard.

The U.S. initiated Asia-Pacific PSI exercises in 2014. Participating countries have hosted their own exercises, including the Eastern Endeavor in South Korea, the Pacific Protector in Australia, Maru in New Zealand and the Pacific Shield in Japan. 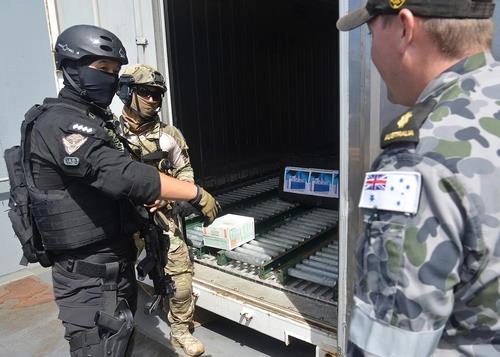