SEOUL, Aug. 9 (Yonhap) -- Residents in some districts of Seoul were dumbfounded by the unusually strong torrential rain this week, as a month's worth of precipitation fell in just one day.

The Korea Meteorological Administration (KMA) said a total of 422 mm of rain fell in Shindaebang-dong of the southern Seoul district of Dongjak from 6 a.m. Monday to 8 a.m. Tuesday.

In Seoul, the average monthly precipitation in July and August amounts to 414.4 mm and 348.2 mm, respectively, for the past 30 years until 2020, according to KMA data.

In other words, the Dongjak district received more rain than the city's average total precipitation for the month of July in a single day.

Seoul residents remain nervous, as the state weather agency forecast that another spell of heavy rain is expected to hit the capital area until Wednesday.

It forecast additional precipitation of 100 to 200 mm in the Seoul metropolitan area and some areas of the central region until Wednesday.

Contrary to the flood-stricken central region, the southern region has been suffering a prolonged drought. This year's precipitation in the southern region until last week was only 484.6 mm, which stands at 57.9 percent of the region's 30-year average of 828.6 mm in the same period. 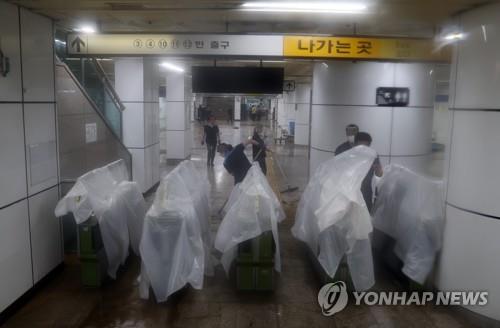 Seoul districts battered by month's worth of rain in one day

Seoul districts battered by month's worth of rain in one day