Banks' outstanding household loans had come to 1,060.5 trillion won (US$810.1 billion) as of end-July, down 300 billion won from a month earlier, according to the data from the Bank of Korea (BOK).

The BOK said that unsecured and other non-mortgage loans declined at a faster pace than a month earlier despite continued growth in mortgage loans.

The fall came as borrowing costs have been mounting in line with the central banks' monetary tightening aimed at taming inflation.

In July, the BOK hiked its key interest rate by 0.5 percentage point to 2.25 percent, the steepest and sixth increase since August last year.

As of end-June, banks' unsecured and other non-mortgage loans fell 2.2 trillion won to 268.2 trillion won last month due mainly to rising lending rates. The monthly fall gained pace from a 1.2 trillion-won decline in June.

Meanwhile, banks' corporate lending grew at the fastest pace ever for the month of July since the bank began tracking related data in 2009.

Their corporate loans stood at 1,137.4 trillion won as of end-July, up 12.2 trillion won from a month earlier, the BOK data showed. The pace doubled from a 6 trillion-won growth a month ago.

The BOK attributed the increase to companies' high demand for COVID-19 support and funds for investment as well as banks' stepped-up efforts for business lending.

According to separate data from the financial watchdog, household loans extended by banks and non-banking institutions declined 1 trillion won on-month in July. 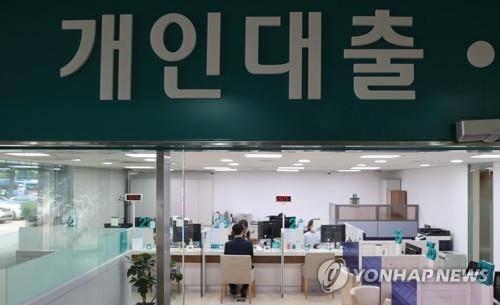