SEOUL, Aug. 10 (Yonhap) -- Samsung Electronics Co.'s management and its union signed an annual wage deal Wednesday, the first of its kind since the company's foundation more than five decades ago.

The world's largest memory chip and smartphone maker and its union reached an agreement on a 9 percent pay raise for 2022 and other benefits, including bigger incentives for working on the Chuseok and Lunar New Year holidays.

The two sides also agreed on forming a task force to improve working conditions and its peak wage policy, which gradually reduces salaries for senior workers several years before retirement.

"We expect the two parties to build a constructive future together through communication and cooperation," Choi Wan-woo, head of human resources at Samsung's device solutions division, said during a signing ceremony held at the company's Giheung Campus, about 40 kilometers south of Seoul. 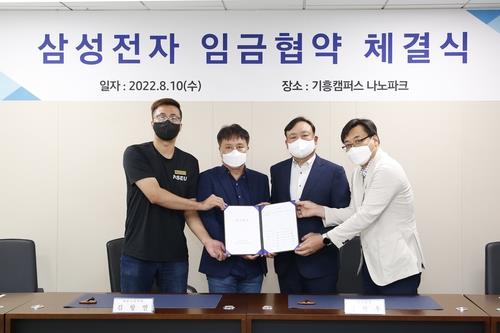 Samsung employees initially demanded an annual wage hike of more than 15 percent. But both sides reached a compromise, given the unfriendly macroeconomic environment.

The tech giant, which was founded in 1969, had been widely criticized for its attempt to prevent workers from forming a labor union.

The company's first labor union was created in 2018, and labor activities have gained ground since May 2020, when Samsung Electronics Vice Chairman Lee Jae-yong, the group's de facto leader, vowed to promote workers' fundamental right to unionize and defend their interests.

Lee, who has been standing trial over a controversial merger of two of Samsung's affiliates, suspected of being illegally designed to help him gain bigger control of the conglomerate, made the comments after the group's independent compliance committee urged him to improve Samsung's compliance culture in three areas: managerial succession, labor unions and communication with civil society.

Currently there are four labor unions, with the biggest one having approximately 6,000 members, or 5.3 percent of the tech giant's total workforce of 112,868 in South Korea.