SEOUL, Aug. 10 (Yonhap) -- Residents in the central provinces of Chungcheong are bracing for heavy downpours, as a powerful rain front that delivered the heaviest rainfall in 115 years to the Seoul metropolitan area this week was moving south Wednesday. 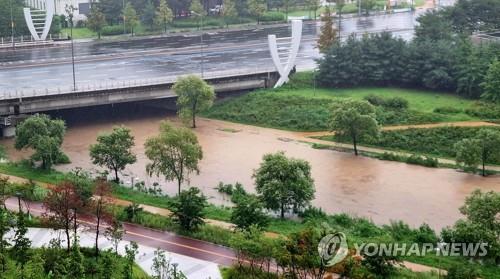 Chungcheong, in particular, is expected to be pounded by strong torrential rains of about 50 to 80 mm per hour, accompanied by gusty winds, thunder and lightning, the KMA noted.

The unusual rain front, created by cold air from the north and hot air from the south, has already dumped 525 mm of rain in the capital area from Monday to early Wednesday morning, leaving 16 people dead or missing and submerging more than 2,500 homes and buildings.

The KMA forecast that the rain front moved south to the Chungcheong regions but is expected to move north back to the capital area later this week.

In response to the heavy rain warning, civil servants of the central city of Daejeon and adjacent South and North Chungcheong provinces have been placed on emergency footing since early Wednesday morning and are taking various preventive measures to minimize downpours and flood damage.

As of late Wednesday morning, some districts of Daejeon had received rainfall of up to 148.5 mm for one day, the KMA said.