SEOUL, Aug. 10 (Yonhap) -- One of two Seoul residents who went missing after being sucked into a manhole in southern Seoul early this week amid heavy downpours was found dead inside the underground facility, rescue officials said Wednesday.

The deceased, known only as a man in his 40s, disappeared into the manhole in the Seocho district, along with his elder sister in her 50s, on Monday night after its metal cover was opened apparently by water pressure from underground amid heavy torrential rains.

The two were among the 16 people killed or left missing in the aftermath of the heaviest rainfall to hit the capital in 115 years.

Rescue officials had earlier presumed the missing people may have been swept away into the Han River that runs through Seoul.

"One missing person was found inside the manhole during a search operation. We're now trying to find the exact location," an official said.

Police plan to conduct an autopsy on the body. 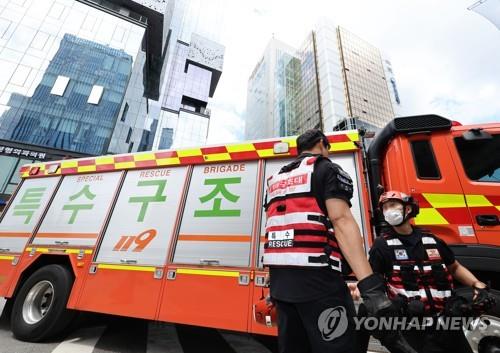