SEOUL, Aug. 11 (Yonhap) -- A rekindled South Korea-China spat over the emplacement of a U.S. anti-missile system here is presaging a rocky road ahead for the Yoon Suk-yeol administration's delicate diplomacy toward Beijing amid a rancorous Sino-U.S. rivalry, analysts said Thursday.

The tussle over the THAAD system resurfaced in the wake of Beijing's claim Wednesday that Seoul's former liberal Moon Jae-in administration pledged to restrict its operation in addition to a "three No's" policy, which the conservative Yoon government views as nonbinding in light of "security sovereignty."

In their Qingdao talks the previous day, Foreign Minister Park Jin and his Chinese counterpart, Wang Yi, discussed such geopolitically-charged issues, including the "Three No's" policy -- no additional THAAD deployment in Korea, no participation in a U.S.-led missile defense network, and no entry into a three-way military alliance with the U.S. and Japan. 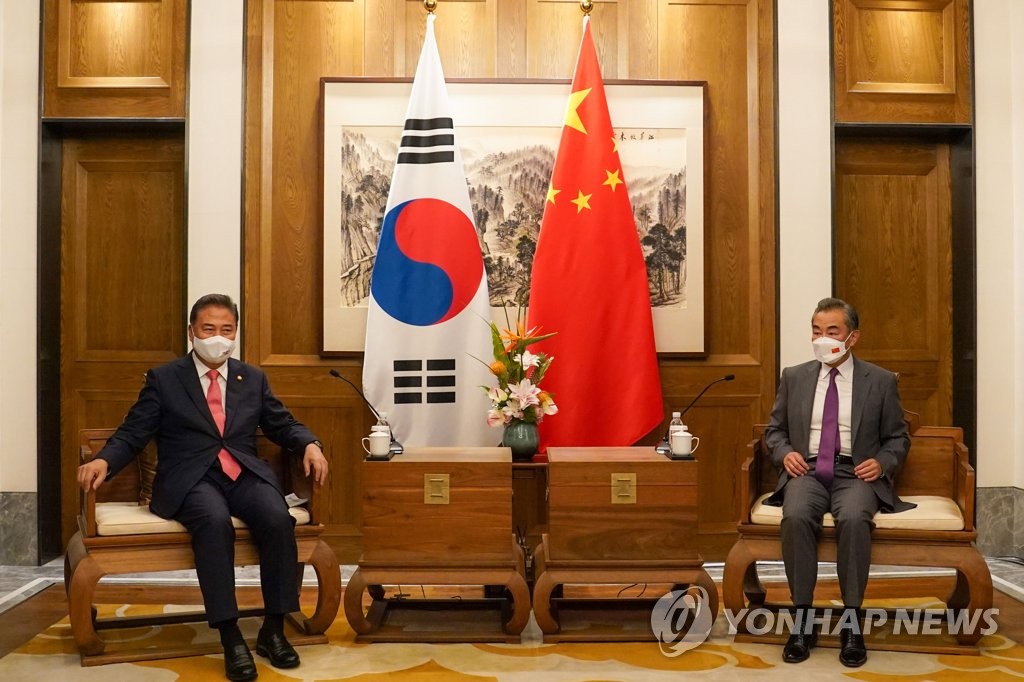 Responding to a question from a Yonhap News Agency correspondent in Beijing during a press briefing, China's foreign ministry stated that South Korea has made the "official announcement" of not just the Three No's but also the "One Restriction" policy, which apparently means putting a limit on the detection range of THAAD's cutting-edge X-band radar positioned on the peninsula.

Analysts said that Beijing's claims appear intended to put pressure on the Yoon administration, which has been pushing to cement the Seoul-Washington alliance and "normalize" the operation of the THAAD system currently in a state of "temporary" installation pending an environmental impact assessment.

Such pressure on South Korea could continue to rise, with the U.S. and China locked in an increasingly acrimonious rivalry on multiple fronts, including maritime security and trade, as witnessed in a flare-up of tensions over U.S. House Speaker Nancy Pelosi's recent trip to Taiwan.

"Based on what it claims to be a policy of the former Seoul government, Beijing would likely make maximum efforts to test and pressure the current Yoon government against a tilt toward Washington," Nam Chang-hee, professor of international politics at Inha University, said.

Nam pointed to the top Chinese diplomat's mention of the need for the two countries to stay committed to "independence" as a "typical" attempt at driving a wedge between Seoul and Washington.

The disputes are a stark reminder of the challenges ahead for Seoul's policy engagement with Beijing at a time when it seeks to reinforce the alliance into a comprehensive global strategic partnership beyond its focus on countering North Korean threats.

During his five-hour meeting with Wang, Park laid out a seemingly still sketchy approach toward Beijing, saying South Korea would play a role as a "bridge" between China and a U.S.-proposed semiconductor alliance involving Korea, Taiwan and Japan, known as Chip 4.

But renewed tensions over THAAD on top of other geopolitical perils appear to be casting a pall over that approach.

China has long opposed the THAAD battery that Seoul hosted in 2017 amid evolving North Korean nuclear and missile threats. It argues a long-range THAAD radar system could target China and undermine its strategic security interest.

China's resistance to the THAAD installation, marked by its thinly veiled economic retaliation against South Korean businesses, appears to have eased as the former Moon administration made public its stance on the controversial "Three No's."

It has called on the Yoon government to maintain the controversial policy, while its officials here say it was neither a formal state-to-state agreement or promise.

The Chinese government has even begun to start talking publicly about the one-restriction approach, which has not been confirmed officially, further dimming the prospects for an immediate breakthrough in Seoul-Beijing ties.

In an apparent show of uneasiness, Seoul's foreign ministry warned Beijing not to keep openly taking issue with THAAD.

"(We) emphasized (during Tuesday's foreign ministerial talks) that should China continue to mention related matters, that would only lead to a worsening of mutual understanding among the two countries' peoples and pose a stumbling block to the bilateral ties," the ministry said in a statement.

South Korea's defense ministry also made clear that the THAAD issue is a matter of "security sovereignty," which cannot be put up for consultations with a foreign country.

"As we have repeatedly told you, the THAAD battery is a defensive tool in terms of a self-defense effort to protect the lives and safety of our citizens against North Korean nuclear and missile threats," Col. Moon Hong-sik, the ministry's deputy spokesperson, told a regular press briefing Thursday.

Beijing's stance on the THAAD issue is expected to harden further, experts said, as it is gearing up for a high-stakes Chinese Communist Party congress set for this fall, where Chinese leader Xi Jinping is expected to extend his rule for an unprecedented third term.

The Chinese political event is likely to be a venue to highlight Xi's feats both at home and abroad -- a reason why observers believe Beijing would want to avoid any optics of appearing weak on high-profile diplomatic or security issues like the THAAD spat with Seoul.

"A period of tensions could likely continue as China, on its part, cannot make any concession, while the new government in Seoul, which has talked of the THAAD deployment, cannot step backwards either amid Yoon's falling approval ratings," said Kim Tae-hyung, professor of international politics at Soongsil University.