SEOUL, Aug. 15 (Yonhap) -- A minor candidate on Monday dropped out of the race for chairmanship of the main opposition Democratic Party (DP), turning the crucial election into a two-way competition.

Rep. Kang Hoon-sik said he will withdraw his candidacy from the ongoing race for the new party leadership.

"Today, I stop challenging the leadership in the party," he said in a press conference. "I will leave the task to two other candidates."

Kang was a distant third with a cumulative 6.83 percent of votes, trailing far behind front-runner Rep. Lee Jae-myung, former presidential candidate of the DP, with 73.28 percent and Rep. Park Yong-jin with 19.9 percent after 12 primaries.

The opposition party is set to hold a national convention on Aug. 28, when it will combine the votes of party members and the results of opinion polls to elect its next leader. 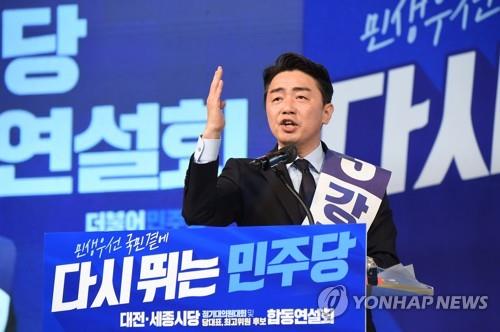