SEOUL, Aug. 16 (Yonhap) -- Prosecutors raided the houses of a former defense minister and a former spy chief Tuesday as part of an investigation into the previous administration's handling of the death of a fisheries official at the hands of North Korea in 2020.

The Seoul Central District Prosecutors Office sent a team of prosecutors and investigators each to the homes of former Defense Minister Suh Wook and former National Intelligence Service Director Park Jie-won to seize evidence, according to legal sources.

The searches are part of a probe into suspicions that the previous Moon Jae-in administration mishandled the death of the 47-year-old official, Lee Dae-jun, in September 2020, including concluding without concrete evidence that he was killed while attempting to defect to the North.

The case was looked into again since President Yoon Suk-yeol took office in May, and the Coast Guard overturned the earlier conclusion and said it found no concrete evidence backing allegations that the official attempted to defect.

Park is under suspicion of ordering the deletion of internal intelligence reports suggesting the possibility that Lee went adrift and ended up in North Korean waters by accident, while Suh also allegedly instructed officials to delete related classified military information.

Prosecutors are expected to summon both for questioning after analyzing the seized materials. 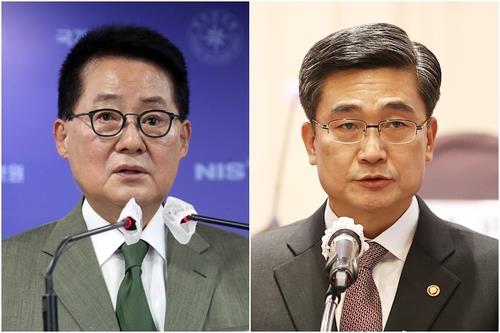