SEOUL, Aug. 16 (Yonhap) -- The top Chinese envoy in South Korea dismissed concerns about Seoul being "artificially decoupled" from Beijing under the conservative Yoon Suk-yeol administration that is openly seeking to bolster economic security on the basis of stronger ties with Washington.

Ambassador Xing Haiming rather voiced worries about the negative impact from the U.S.-led "small groups," such as the Chip 4 alliance in the semiconductor industry.

He expressed the view, looking back on the South Korea-China relationship over the past three decades and presenting his outlook for its future, in a special written interview to mark the 30th anniversary of their official ties. The neighboring countries, which fought against each other in the 1950-53 Korean War. established formal diplomatic relations on Aug. 24, 1992.

"Having gone through 30 years of ordeals, Sino-South Korean relations have entered a more mature and stable stage. In the meantime, internal and external environments we face have changed significantly, while opportunities and challenges at hand are increasing," he said. 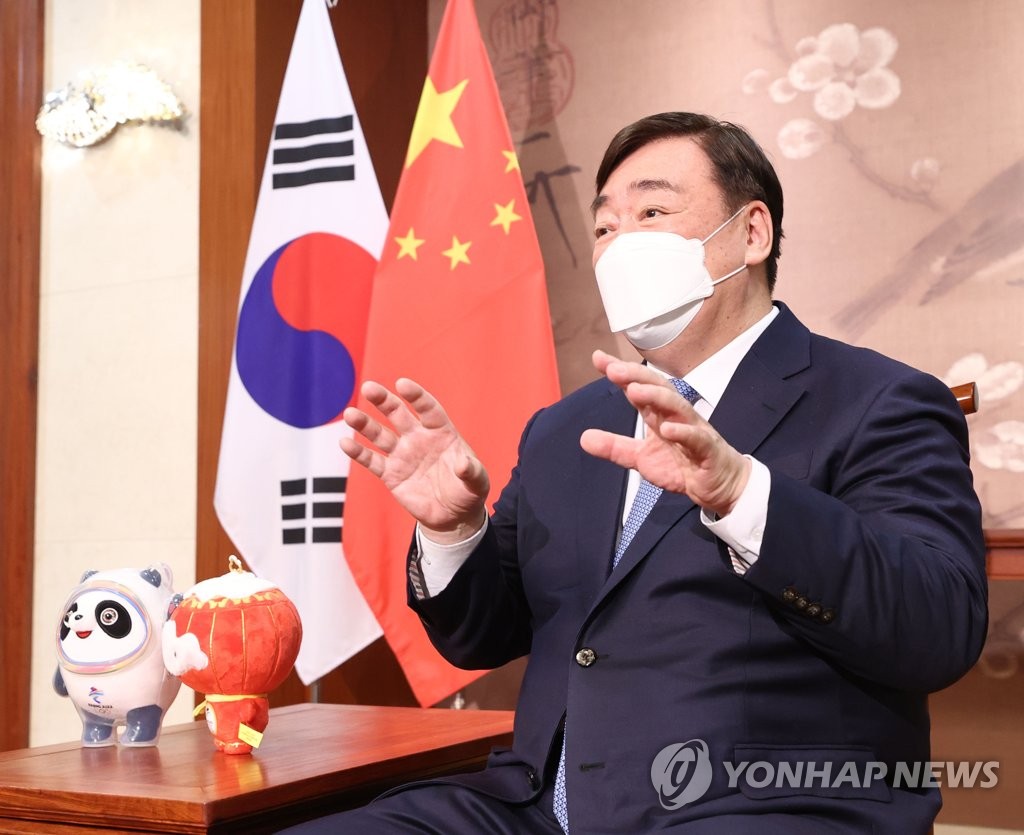 The anniversary comes as the two sides are at a crucial juncture amid the growing rivalry between Beijing and Washington, the problem of resiliency in global supply chains and continued stand-offs over the advanced U.S. missile defense system positioned in South Korea. Many observers are concerned about the rise of anti-China or anti-South Korea sentiments among their peoples.

South Korea has long struggled to strike a balance between its time-honored alliance with the U.S. and close economic partnerships with China. China is still South Korea's largest trading partner. Exports to China account for around 25 percent of South Korea's total exports.

In the chip trade sector alone, China accounted for 60 percent of South Korea's exports last year, the ambassador pointed out.

But there are growing indications that Seoul is leaning further toward Washington even on the economic front. It has participated in the Indo-Pacific Economic Framework (IPEF), initiated by the Joe Biden administration.

South Korea is moving to join the Chip 4 alliance also involving Japan and Taiwan, which China regards as aimed at countering its clout in the region.

Xing emphasized the need for Seoul and Beijing to maintain the principle of respecting "each other's core concern," and promoting mutual cooperation and prosperity.

"It is necessary to ensure that Sino-Korean relations constantly develop in the right direction at all times," he added. "Artificial 'decoupling' does not suit the interests of the two nations and public sentiment, and it can never be realized,"

He accused the U.S. of creating "small groupings" designed to intentionally get China ostracized and warned that other countries will only see themselves damaged by helping Washington's "political purpose."

Regarding the issue of the missile defense system, called THAAD, the veteran diplomat admitted that it has already dealt a serious blow to the Beijing-Seoul relations and remains unresolved.

He urged both sides to make joint efforts together to prevent the matter from "resurfacing" and posing a stumbling block in their ties.

Asked about the possibility of President Xi Jinping meeting bilaterally with his South Korean counterpart in case they attend the Asia-Pacific Economic Cooperation or Group of 20 summits together, both slated for November, Xing avoided a direct answer.

He just reiterated that China is willing to push proactively for "high-level exchanges" with South Korea.

Touching on the anniversary, he recalled the historic moment of the opening of the Chinese Embassy in Seoul on Aug. 27, 1992, which he witnessed as a working-level diplomat.

"As China's ambassador to South Korea, I feel a heavy sense of responsibility."