SEOUL, Aug. 16 (Yonhap) -- President Yoon Suk-yeol said Tuesday he is thinking of bringing unspecified "changes" to better serve the people amid speculation he could shake up the presidential office to turn his approval ratings around.

Yoon has been widely expected to carry out a shake-up around the 100-day mark of his taking office as his administration's image is badly in need of a makeover following weeks of unusually low approval ratings for the president.

The ratings have slipped to under 30 percent, with pollsters largely attributing the decline to Yoon's personnel choices at the presidential office and in his Cabinet. 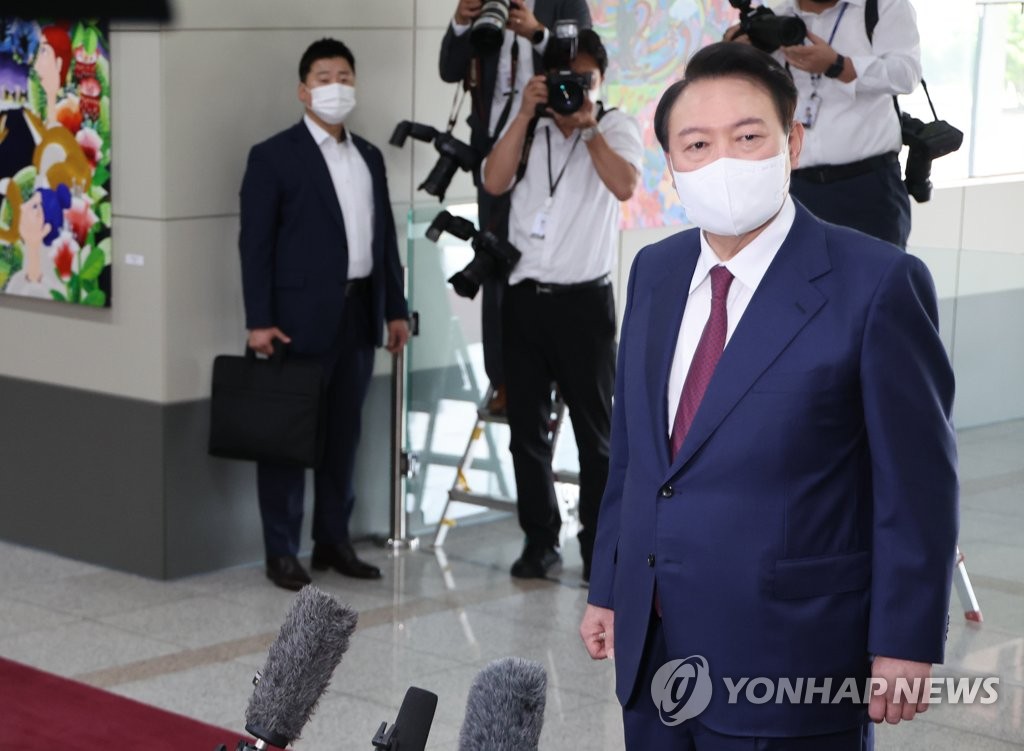 "Since taking office, I've been all over the place because of various issues, but there are things I came up with during my vacation period, and I plan to make changes in a meticulous and substantive manner to bring reform for the people," he said when asked if he has any plans to shake up the presidential office.

Yoon will mark his first 100 days in office Wednesday.

On Monday, he gave his first Liberation Day address to mark the anniversary of Korea's independence from Japan's 1910-45 colonial rule.

In his speech, he vowed to improve relations with Japan that were badly frayed under his predecessor, Moon Jae-in, but stopped short of offering specifics on how to resolve disputes over wartime sexual slavery and forced labor.

"That's a question we have been thinking deeply about with the foreign ministry since before the launch of this administration in terms of various measures," Yoon said when asked by a reporter Tuesday whether he had solutions to the disputes.

"I didn't go into the details yesterday so that I could talk about the general direction, but you can think of it as being included in the aim," he said. "The issue of comfort women is also related to human rights and universal values."