INCHEON, Aug. 16 (Yonhap) -- A university freshman indicted on charges of attempted rape and murder of a female schoolmate is said to have confessed to pushing the victim off a campus building, judicial officials said Tuesday.

The 20-year-old student of Inha University in Incheon, west of Seoul, is accused of attempting to rape the victim and causing her to fall to her death from the campus building on July 15.

The victim was found by a passerby about one hour after her plunge from the third floor of the five-story campus building but died at a hospital three hours later.

The suspect who allegedly fled the scene after the victim's fall was initially charged with sexual assault, but prosecutors added a murder charge against him last week, citing his "willful negligence" leading to her death. 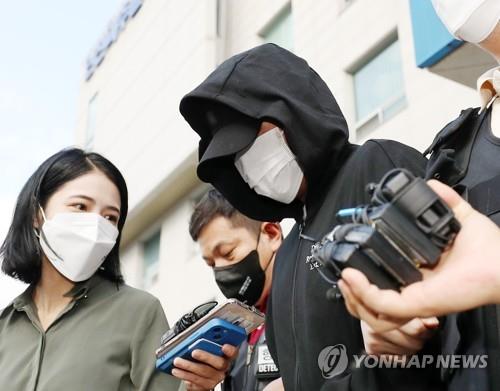 According to the judicial officials, the suspect made statements to the effect that he threw the victim out of the building window during an initial questioning by police.

But he altered his statements later during the prosecution investigation, arguing that he cannot remember exactly what had happened.

A university professor who took part in the prosecution investigation told Yonhap News Agency that police records contained the suspect's remarks that he pushed the victim off the building while attempting to rape her.

The judicial officials also said a video from the suspect's phone discovered on the scene contains 29 minutes of audio from just before what appeared to be attempted rape to just after the victim's plunge from the building.

The victim was apparently heard in the video resisting attempted rape in the beginning and wailing about 20 minutes later, the officials said.